Competition of ice dancers at Rostelecom Cup promised to be extremely exciting! The fight for the first place between Weaver-Poje and Cappellini-Lanotte, personal battle between Ilinykh-Zhiganshin and Sinitsina-Katsalapov and a fight for possible bronze for Guignard-Fabbri and Monko-Khaliavin. As you can see, lots of drama and it was really hot at the arena. 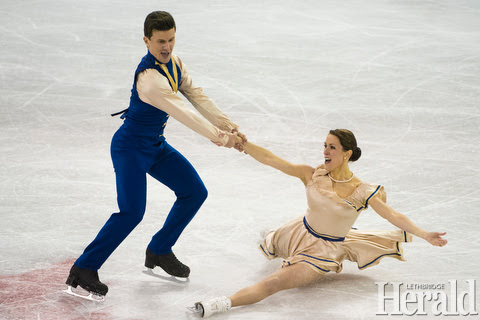 I’m not a fan of Charlene Guignard – Marco Fabbri at all but I can’t not to appreciate their progress. Yes, they are not so gifted by nature, not so beautiful as other skaters but they are a hard workers who at every competition try to show their best. Sometimes it’s way more important than natural talent. They don’t have beautiful lines, or great skating skills but they skate with lots of energy, their short dance is nice and well received by audience and they don’t miss much of their levels. I think I start to like this pair, I like hard workers. 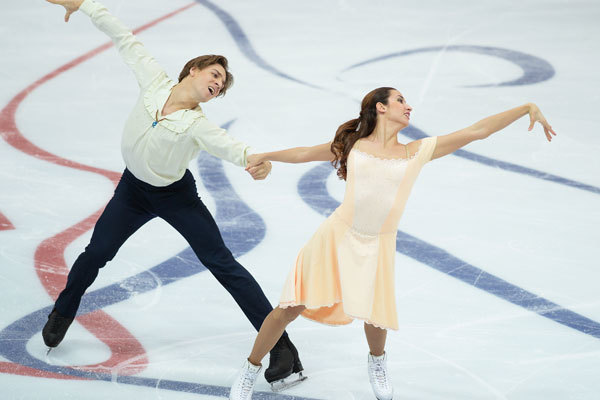 Ksenia Monko – Kirill Khaliavin in contrary are gifted by the nature way more than the Italian team. Their lines are beautiful, they have good skating skills, they have good technique, eventually they are beautiful people who look great on the ice. But….unfortunately they don’t have the ability to show their best at competition and use the chance they got. Both Ilinykh – Zhiganshin and Sinitsina – Katsalapov gave them the chance to show that they are stronger technically and they could have been third after the short dance. But…as always Ksenia and Kiril didn’t used their chance and something tells me that it was their last international event of this season (except maybe B events).

As for Ilinykh – Zhiganshin and Sinitsina – Katsalapov….the trainings were tough too )) Nikita fell and almost crushed the board, then tried to ram the other pair doing a lift. Ruslan fell too. Lots of drama and lots of nerves. Though turned out that Katsalapov nerves are stronger.

I don’t like Ilinykh and Zhigansin’s short dance at all, it doesn’t look impressive or interesting as it probably was planned. Especially with classical waltzes of their competitors on the background. But it’s late to change the dance and the best thing they can do is leave it like it is and concentrate on the technical side. The dance can be not a masterpiece but the elements must be solid and the levels must be high and then judges won’t skimp for marks. From the first start it was clear that change of the edge after the first twizzle is not convenient for them and it’s only a question of time when they will make a mistake here. And it’s happened. Maybe it will make them to think of a better option? I hope when it’s already nothing to lose they will make a great skate of the free dance.

At Skate America Sinitsina and Katsalapov performed their short dance better. Maybe because the environment was more friendly?) But I still like the dance and think that it’s the best short dance in Russian team. Perfect choice of music, zero question about music cuts, no drama, just a beautiful waltz. Good that this time without a deduction on the lift. Hope in the free dance they will skate without such nerves. There are almost 0 chances to win silver here but what they need and can do is to be as close as possible to the leaders.

As I wrote before Anna Cappellini and Luca Lanotte decided not to be creative or original and both their dances is 100% suitable and convenient for them. And it works. I think they have improved from their last grand-prix, the second part looks not so slow, moves are more polished and the overall impression is stronger. The only weakness now is a final lift. It’s always better to show something great at the end of your performance to finish it on the high note. But this lift looks a bit slow and sloppy and spoils a bit the overall impression, they also had some problems with this lift at trainings, so maybe is better to change it?

Kaitlyn Weaver – Andrew Poje look way better in their short dance. Of course because they had more time for preparation and polishing. But it’s definitely was a right decision to change the dance. Classics suits them a lot but I also wish they had chosen a different music. Something more powerful, something that will show that they are a mature skaters. I wonder why they haven’t chosen Shostakovich Waltz #2. The lift was beautiful and easy done, the twizzles were budget but what I really like about them is how they present themself! Just a king and a queen on the ice!

I don’t think that the order of first three duos will change after the free program. But who knows the ice is slippery.