Victoria Sinitsina and Nikita Katsalapov were the dark horses at Skate America. Noone has known what to expect from them. We haven’t seen them around nine months. Previous season was a tough one for them. For sure not such outcome they expected but it’s an experience to learn. I think they definitely have learned this lesson because this season they have taken into account all their previous mistakes. No more PR in media, they were suspiciously quiet, and that’s good because the results speak for themselves. 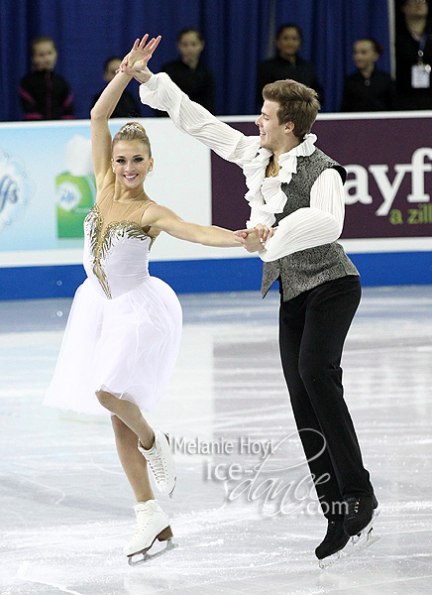 Their short dance proved to me once more time that nothing is be better for a waltz than beautiful, powerful classical music. As for me it’s the best short dance in Russian team. I have zero questions about music cuts and concept of the program. Beautiful dance with lots of ballet moves. Victoria’s arms is just stunning! Great dance, but they still have some things they need to work on. Especially on their key-points and a lift – it’s beautiful but unfortunately the time is ticking. This dance has lots of potential and I’m sure next time will receive higher marks.

I was surprised that they managed to beat Gilles and Poirier in SD, but I was was even more surprised that they kept their silver medal after the free dance too! Not only beat Piper and Paul in FD but won the technic over everyone at this event including Worlds Silver medalists Chock and Bates! It was quite a sensation.

Their free dance is not a masterpiece or something new in terms of ice dances. Well known and frequently used in ice dances theme “a man and a woman in love”. But it’s beautiful, solid dance that suits them. And what is even more important they are capable to skate it clean. After previous difficult dance, with lots of skating in holds, new lifts which is definitely was too difficult for a new pair, they decided to play safe. I think it was a right decision. Yes , this dance is easier and maybe not so impressive but will help them to show their strengths, and won’t look bad in comparison with the dances of top-duets.

I also want to point how gorgeous Victoria looks! Her dresses is amazing!

It was an impressive start of the season! And quite a message to the Russian federation. We haven’t seen yet other Russian duos at the international events, so it difficult to predict who will be their bet. But second place at Skate America gives for Sinitsina and Katsalapov good chances fot the Grand-prix final. They need another silver at the next GP event….that for them will be in Russia….in company of their former partners Ilinykh and Zhiganshin. Something tells me that it will be a great battle!

Chock and Bates presented at Skate America their new short dance. Read here about it.