After a great success of Russian girls on international arena and especially after success of another young Russian girl – Evgenia Medvedeva, lots of former skaters gave a comment on current situation in Russian women’s figure skating. Now it’s the turm of Maria Butyrskaya (the first Russian to win the Worlds title) to share her opinion. 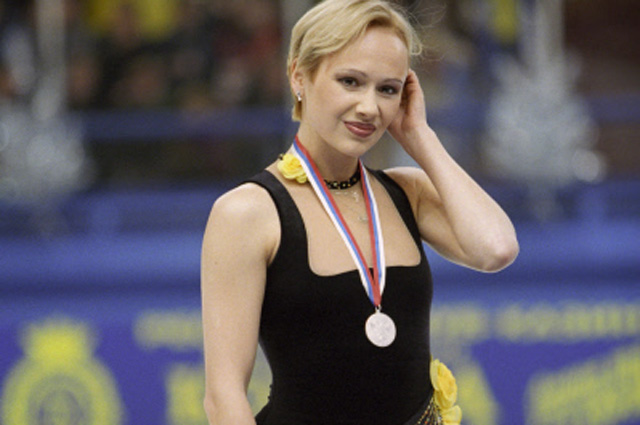 I don’t even know, which motivation Sotnikova should have. It will be hard for her to deal with such young and in a good way brazen girls who haven’t achievements yet.
With such competition she shouldn’t have a single day of rest. Yes, it’s hard, but after the Olympics she should have gone to the World Championships. You can’t skip a year, “Dancing with the Stars” -it’s undeniably beautiful, and no one will forget about Adeline, but in figure skating there are not many people waiting for her and believe in her. – Butyrskaya said.

It’s difficult for Lipnitskaya. She’s changed coaches, and I believe in Lesha Urmanov, he’s my friend. I know him well, I know how he works, he’s a balanced person, he understands the technique. If they come together and Julia listen him, if they change the technique, they will succeed.

Obviously the technique must be changed. When she was small and slender, this technique was enough to do triple jumps. Now she grew up gain weight and this technique is no longer enough.

At the European Championships I worried more about Radionova, she had grew up by 10 cm over the summer. I know what it is, girls often can’t cope with that but she coped, I deeply respect her for that.

I know in which “parsing” Lena was early in the season, she had to want very much and to work hard with her coach to gather herself like that.

For Medvedeva all of this is yet to come, as now she’s small, thin and everything is easier for her. But they are both unique, cool, light, beautiful, with jumps, with a good skating skills and with interesting programs.

Previous post
Nikolai Morozov: Amodio should have been on podium in Bratislava
Next post
Alexei Mishin: Tuktamysheva won’t skate in Boston