It’s a translation of an interview which Rafael Arutyunyan gave in Russian to Russian sports portal R-Sport.  Here’s a link to the original interview.

I found it quite interesting. Rafael compares Russian and American approach to figure skating, talks about Russian women’s figure skating, Ashley Wagner, and Patrick Chan’s perspectives. Some his points are totally worth discussion.

So, firstly the translation of some parts of the interview and then some my thoughts about it.

Rafael, on which level women’s figure skating is now?

Rafael: There’s a frequent change of leaders now. The main danger is a coming trend of appears of such like Medvedeva. Bah! And she appeared. At Grand-prix Final she was a favorite. Last year was Radionova, the year before – our star Lipnitskaya. And it scares. At least me.

Rafael: Because the world got used to the set standards. As in school: the more often you tell about something, the better it will be remembered. For example: Tiger Woods, Michelle Kwan, Mao Asada.

Rafael: And what will happen? I have a question: what is going to happen with them?

They will grow up

Rafael: Grow up, and the next will come? In two years? We won’t remember the names and maybe we will get tired of it? Or you won’t get bored, and you will wait …

Will see and then will review the archives.

Rafael: If we look a little deeper into the history, it was (Irina) Rodnina. This name is the era. And now is  one, then the other, then another one….

Does it depend on athletes?

Rafael: I have a feeling that we have rejuvenated the sport and came to the situation when the girl with the body of a boy is competing with a woman. Unequal conditions. I would give to these 12-year-old girl a bandage, fastened the tushy made of  foam, something else in front made of silicone and say, “Come on, take a skate, try.” Try to unwind with all of this in addition to the costume.

The sport become beggar because of aggressive youthfulness?

Rafael: In my opinion, yes. Senior skater presents the character in different way, with his understanding of what he wants to say on the ice. And young is agile, mobile, without load of medals. He goes out and starts to spin. And as technology of training the complex elements have improved, we started to stamp these athletes. If before we have taught a man the needed tricks to win till sixteen or seventeen years, now – till twelve or even ten. Ten-year-old children in Russia have those elements that are now performed in the Grand Prix Final. The same 3-3 combinations. Among seniors only Tuktamysheva and Asada can do the triple axel. I haven’t seen it among children but I’m sure that soon triple axel will be performed by a ten-year-old. Where this rejuvenation will take us? And where will go those women who is now kicked out by this young girls?

Every hero needs at least five years of glory?

Rafael: Integrity is needed. Soon we’ll see whether they knocked out Lipnitskaya completely. How do you think,  knocked out, or she will come back?

While she went to another coach.

Rafael: And (Adelina) Sotnikova they have already knocked out, or she will come back too, together with Lipnitskaya?

And do they want to come back?

In motivation. But neither Sotnikova nor Lipnitskaya have disclosed this motivation. Or don’t realize it.

Rafael: And while they are realizing, Medvedeva appears and eliminates them as a class. Then the next will appear and eliminate the current leaders. There was a time when the age minimum for the Olympics started from fifteen years. Many remember how fifteen-year-old Tara Lipinski came beat and Michelle Kwan. Then, the age minimum was lowered to fourteen years, and in 2005, 15-year-old Mao Asada, just like today Medvedeva, won the Grand Prix Final, beating (Irina) Slutskaya, but couldn’t go to the Olympics in Turin. Who determined this figure – 15? Or 14? It is based on what? At this age you can get married? Can drink?

Don’t you want to make a bet on talented 14-year-old girl, who two years later would win the Grand-Prix Final, and then the World Championships? Especially, since you probably have such.

Rafael: In USA? In USA we don’t have such children. Because there are no factories for the production of such children. In America everything occurs spontaneously. In Russia there is a conveyor that stamping athletes. At the age of four years children are taken to the skating rink and the selection begins. Less rigid than before but it exists and then children start to train as professional skaters. In America any child of any age comes at any time and say, “I want to learn how to skate” and he allowed. Time passes and a child thinks, maybe I should do sport more seriously? And he starts to take lessons from a professional coach. But in the beginning he just goes to drive at the skating rink. 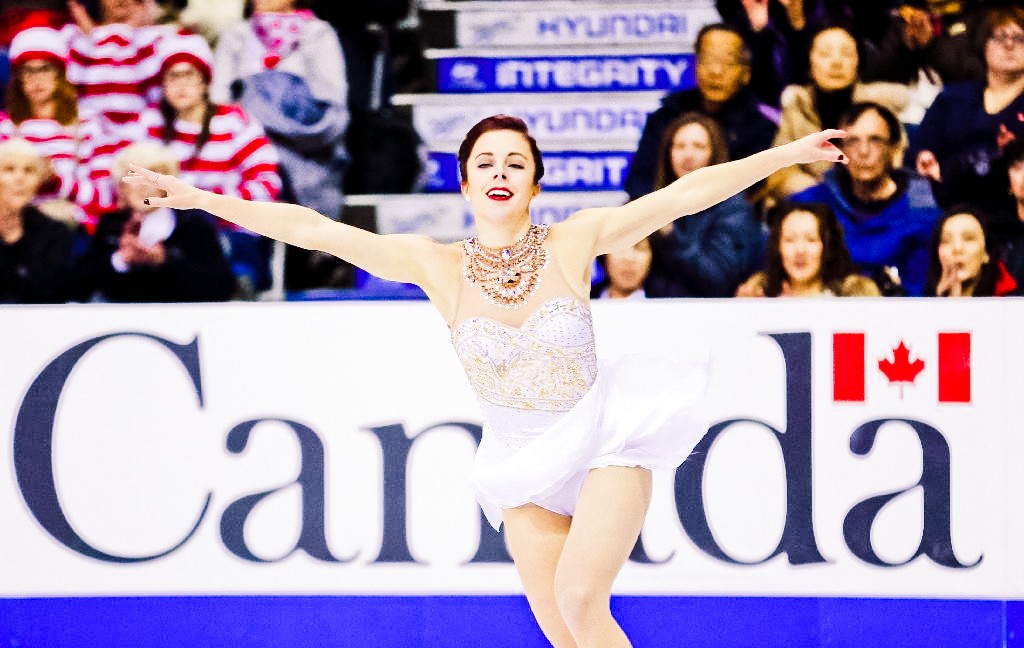 When you with Ashley Wagner go to trainings doesn’t she feel annoyance from the fact that she is such a beautiful and understanding the program skater, but objectively it is difficult for her to do it all and easier for Radionova or Medvedeva?

Rafael: The problem exists, because all the previous years she has lived on the ice under the principle of “I just want to skate“, she wasn’t prepared like a resident who knows how to behave in all situations.

Rafael: Relaxedness. But there are also disadvantages: there are moments when you have to fight but she can’t. And if she had been brought up “at production” – not just with the ability to fight, and with knowledge of the fight, the situation would have been different. My student 16-year-old Nathan Chen may fall but he was sharpened for the win. Why is he? Because before me, in Utah, where he was born, he was brought up by a Russian coach.

Of course. In America, people understand that there are some other options in life, so they are not sweating. We have a different mentality: we are all in this business and it is necessary to reach the limit.

Rafael: Sometimes it happens. She understands that it’s difficult for her. But isn’t it difficult for Mao? Given that she was technically much stronger than the others. Like Plush (Evgeni Plushenko) at his time. Why he lived for so long in the sport? The baggage was powerful.

You called Lipnitskaya “our star”

Rafael: She was probably the main event. I don’t know how much it was inflated or real, still the talks about her don’t cease. Although, she can’t really compete with these young girls.

Is she a great talent?

Rafael: Of course! She is, as now Medvedeva, Radionova, they went through a “meat grinder” to be in this place. Very talented. But who among them will become a star? And, by the way, what is your understanding of the star?

The combination of a special personality with stable victories.

Rafael: I agree, especially with the second part of your definition. Talent needs to be proven every year. Why Plushenko is a star? Because for so many years has been saying: “Just me! Won’t give to anyone what is mine”. Slutskaya is also from the category of “Mine. I won’t give it”. And when you’re a special personality but kind of “appeared-gone,” then the question arises: which of them would be a star?

Marina Zueva said that there are rules, and you need to play by them.

Rafael: Of course, because in relation to these rules your athlete may not be the best, and you will lose.

Are there girl in USA who will “come tomorrow”?

Rafael: Very little. Russia is ahead of America for five or six years. In Russia there are guys who can do a lot on the ice, in America there are none. Although, America is unpredictable … that there may appear one, but who will want so much and be able to beat everyone.

But in men’s figure skating  in the world today are three distinct perspectives – (Yuzuru) Hanyu, Shoma Uno and Jin Bojan. I don’t see the tools to deal with them. It is possible but very difficult.

You don’t belive in Patrick Chan?

Rafael: In my opinion, Patrick made a completely wrong conclusions from what happened to him in recent years. He needs a technical coach.

Rafael: He needs Mishin, yes. And he works with choreographer. While Mishin, may not agree, because it’s a big responsibility. Chan lost several years. With all his ideal skating it’s necessary to return the technical elements.

Some may say that Arutyunyan is just envy because he hasn’t such talented girl, or because he works with Wagner and she can’t beat them. But recently Oleg Vasiliev said almost the same. He’s a pairs coach and doesn’t have any personal interest in women’s figure skating. But he shares this opinion. And I also agree with them.

Personally I’m tired of this “one-year star”. I’m so grateful to figure skating for Michelle Kwan, the brilliant rivalry between Yuna Kim and Mao Asada. I’m so glad that Carolina Kostner is Italian and had an opportunity eventually skate to her full potential! Would we have a chance to see her mature feminine skating and gorgeous programs If she had represented Russia? I doubt it.

And what to do? Some suggest not to give high PCS to this young skaters like it always has been. But this new wonder-babies come not only with amazing jumps and consistency but they’re also have a full package in terms of PCS – lots of transitions, musicality, difficult and different body movements….so the judges just can’t give them too small PCS under the current rules( But every time I see this young stars I feel a bit robbed. Robbed of possibility to see how great they could became when they grew up. But we won’t see many of them…start to win early….break early too((

And I also completely agree with Arutyunyan about Patrick Chan. If he’s serious about his come back he need a technical coach not a choreographer no matter how great she is.

Read also about Stolbova and Klimov planning to add a quad throw at Europeans.