Mikhail Kolyada: Luck means a lot in sports. Anything can happen at the Olympics

by Anastasiya Panina for matchtv.ru 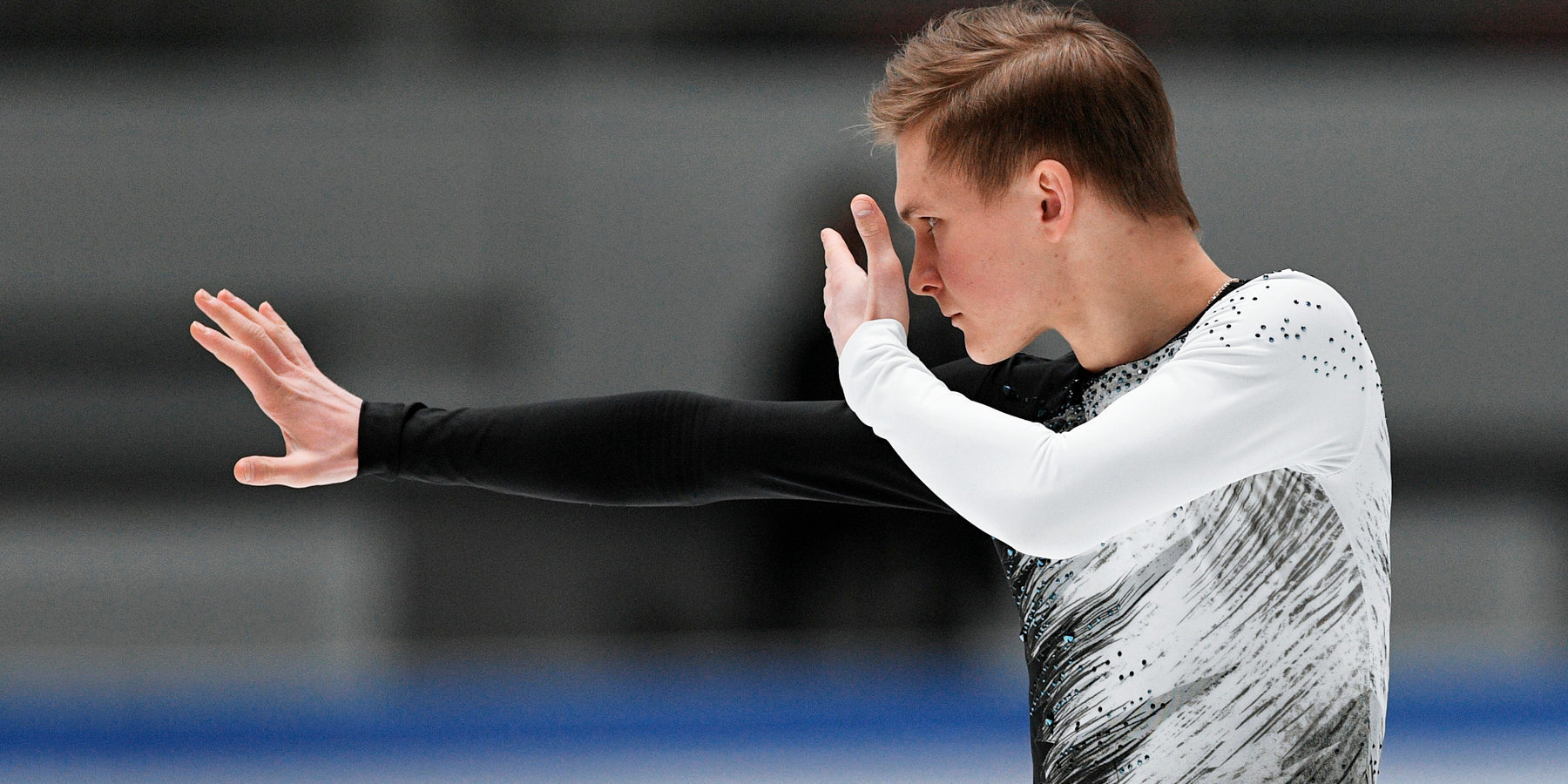 At the Russian Nationals all figure skaters told that they have only one wish – to rest. Did you had a chance?

– Yes! I rested and I full of strength. It was the best New Year. I turned off the phone, saw nothing and heard no one. I didn’t wrote any greetings, just posted a couple of photos, that’s all. I ate, slept, watched movies. Went for a walk, ate again and slept. I relaxed morally well.

How was the situation with sinusitis solved?

– I came from the Russian Nationals and the next day I went to the hospital. Did another an X-ray. The doctor looked and said that everything is ok. Usually, recovery takes 10-14 days in such cases. Rarely when a week is enough. I was glad that they wouldn’t put me in the hospital again and wouldn’t puncture the cartilage, wouldn’t insert the tube. Different things have happened to me, but puncturing the cartilage is an unpleasant procedure. Especially when the doctor holds your head, says “Hold on” and sticks the tube with a crunch.

How is it to skate when your nose is not breathing and you have a hellish headache?

– Incomparable “pleasure”. I have never skated in such a state before. And I would not wish that to anyone.

Sometimes it seemed that you were losing consciousness.

– Yeah, flashes at the end of the free program: here I remember, here I don’t remember. In the eyes darkened. When I got to the final pose, I thought “Is it really over?”

Despite mistakes men’s competitions at the Russian Nationals turned out especially bright in terms of emotions. Do you agree?

– Yes, guys did well! I watched all the performances and realized that the overall level of competitions is gradually increasing. It is good when there is healthy competition in the country. Then in some ways it’s easier for you to adapt when you go to international competitions.

In any physical state, with performance of any degree of success, you still have such quality as PCS. Skating skills, lines. Is it natural quality or did you work on it?

– I’ve worked on it since childhood. Sometimes guys from different cities come to us, they go to the ice and it is immediately obvious whether they had choreo classes or not. I have been working on choreography since 7. Ballet barre, center – everything. At first you think about it, try hard and then the body does everything itself as it was memorized.

Can an adult athlete catch up if he didn’t worked on choreography in childhood? For example, Chinese figure skater Boyang Jin. Choreo is not his strongest side.

– It’s hard, but possible. Boyang, by the way, became better. I watched his programs this season, and I really like it. His programs look exactly like figure skating, not just jumping. If he continues to work in this direction, it will look very worthy.

Despite the fact that Boyan has become better, they still give him low PCS. Maybe because he lost in consistency?

You noticed that not everyone can do well at the Olympics. Sometimes athletes perform at a high level for many years, but they don’t even get to the Olympic Games. And someone “shines” only at the Olympics, not having other serious victories. Is it a lottery?

– Yes, luck means a lot in sports. Anything can happen at the Olympics. Literally “and the last will be the first.” A person needs to sleep well, eat right, be well prepared psychologically and physically. When this all come together, you can do things you didn’t even hope for.

For Russian team preparation for the 2018 OG was nervous. There were problems with the doping scandal, then questions about the flag, the anthem, uniform. Did it somehow affect your preparation?

– Of course, I hoped that the national team would be allowed to compete, that there would be Russian flag and anthem. The only moment of indifference was uniform, I din’t care about it. We didn’t walked there naked and that’s enough. Conversations between federations, between athletes added some pressure. The Federation constantly said: “Guys, be careful.” This is an extra reminder that you need to be vigilant, nothing more.

I can’t say that I was thinking all the time “What will happen?” No. I was preparing, dealing with some issues.
Happened what happened. This can’t be changed or lived again. We must go further. Strive for the next Olympics.

What mindset did you have before the short program at the Olympics team event.

– At some point I burned out. Before the start I need to worry a little. There should be some fire. But I went to the ice understood that I was empty. No energy, no fire. I didn’t want to think what would happen now. Although deep down I assumed a bad outcome. When it all happened, I just … I shot myself with a machine gun in my mind. Killed myself and buried in a pit.

We skated the short program on the opening day. Some of our guys went to watch the ceremony later, but I was just laying and looking at the ceiling.

How did you dig out from that pit later for the individual event?

– Still it was hard. Although no one expected me to solve a super task, I understood that perfectly well. But I wanted to show EVERYTHING. Perhaps that is why it did not work out. I wasn’t relaxed enough. It’s a shame that I could not show beautiful skating. I watched these performances once. Only once, because I don’t like to watch what I do there.

So it happened for some reason. You may not believe in fate, but it has already happened. This is my life and part of my career.

How did the Olympics change you?

– I came from there a different person.

In a positive way?

– Yes. I think yes. Matured. When such important events for you go not in a way you would like them to go, you have to learn to look at everything differently. Even at everyday things.

Did you want to go through this experience yourself or needed the support of close ones?

– There was support. From family, coach, friends. From the team also. Without them I don’t know how I would have gone to the free program at the team event. I had very bad thoughts.

Did anything surprised you in Korea? You were there for the first time, right?

– No. To be honest, I don’t remember almost anything, it’s all a blur. Didn’t notice anything, didn’t go for a walk. We have such competitions when after free program evening we fly home right away. You don’t have time to see the city or try food. In Korea, of course, we stayed longer. 10 days … I don’t even remember exactly. We ate something in a common tent, tried a little Korean cuisine. Once I went out of the Olympic village. Some of the guys went to the ocean, I did not. One day there was a sandstorm. The flags from the houses where we lived were torn on the ground. The snow was yellow with sand. The wind was terrible. I remember Korea like that (laughs).

We lived in ordinary apartments. As they told me later, these apartments have been already sold. Everything in the apartment was covered with a film so that we would not spoil anything. I remember, there were carpets in the elevator. The four of us lived in a three-room apartment: Vova Morozov, Sasha Enbert, Dima Soloviev and me.

And did you take anything good from this Olympics?

– Good? (Laughs) I had my 23rd birthday on the plane flying from the XXIII Olympic Games.

After the Olympics, I was very tired, I recovered for a long time. And then I realized that World championships is ahead, this is also an important competitions and I need to perform well there. And I succeeded.

At what moment do you realize that the jump will not turn out?

– In general, already on the entry. Mistakes happen for several reasons, but the main one is loss of concentration. It works in life too. If a person loses concentration while walking, he falls or stumbles. If he is not in a hurry, he knows what he wants, he does it. But when you have chaos in your head, when you are rushing between “I will do it, I will not do it”, “I know – I don’t know”, when mistakes are inevitable. Better not to think about anything at all. What is it to think about at competition? Everything has been thought out in training.

Don’t think that someone looked at you badly and you made a mistake because of this. Yes, it happens, but there are different competitions for this where you can work out different situations. You gain experience, you perceive events in a different way.

Which is more difficult quadruple toe loop or triple axel?

– What if I say that both of these jumps are easy? (Laughs) It depends on my condition, on the layout of the program – at the beginning or at the end. Other things being equal, there is not much difference for me.

They look easy when you successed.

– Yes, and when they don’t turn out, I have to strain more, and it still affects the jump.

I happen to watch the video of my performances and workouts and I always see when the element was hard for me. Ideally, the jump should look as natural as possible in the program.

Axel is a very cool jump. When everything fits together, it’s very beautiful. You are on the right foot, then on the left foot, then you spin and don’t notice how you rotate three and a half turns.

Why they appalude the one who pulled the first starting number?

– Tradition. Maybe this is a kind of support, or vice versa, sarcasm like “hurray, we are not in his shoes” (laughs). It is believed that it’s harder to skate first, especially in the short program. Personally, I like to skate first. Warmed up, drank some water, exhaled and went to skate. You don’t have to go to the locker room and wait, take off your skates, think about something once again.

Previous post
Sofia Samodurova: Turned out everything I wanted and even more
Next post
Mikhail Kolyada: Everything in life is trifle except family and health