Anna Pogorilaya “What was that?” or “Take it off immediately”

Anna Pogorilaya is a girl of extreme beauty. With such exterior she can be a movie star! That is why I extremely disappointed with her new costume.

She has nothing to hide or disguise using the special costume tricks. Anna looks wonderful so why no to highlight it. Is it so difficult to sew a beautiful dress for such girl? I’ve never been a fan of her costumes, but at least they looked ok. But this one is just tasteless. 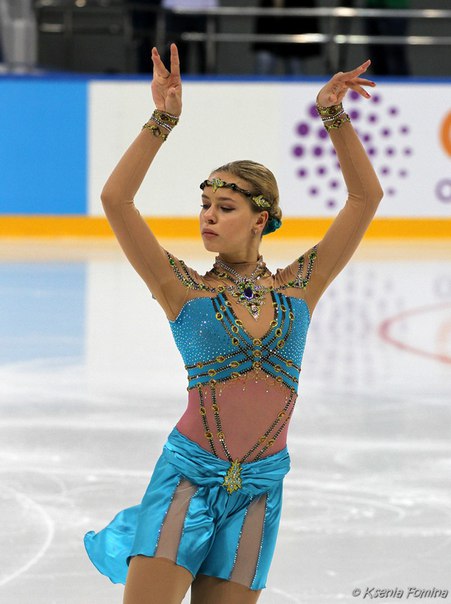 Despite of lots of expensive rhinestones and appliques the dress looks cheap. This metallic blue cloth look just like back to 90th. Ok for kindergartens whose costumes are sewn by their moms at home and totally not for the figure skater who will represent his country on big international events.

The top looks strange and makes Anna look wider. And the worst part it’s the middle section of the costume. What does it suppose to mean? That a Scheherazade’s costume, so, i quess it’s suppose to be an imitation of nude body. But why is it pink?!

The only thing that I like about this costume is a headband. She should keep it. But the whole costume is a disaster. Anna still has some time for a costume change and I hope the will do that.

See who else have already failed with a costume for the new season.

Previous post
First event of Russian Cup, Samara 2015
Next post
Chock and Bates “What was that?” or “Take it off immediately”