Great news! Tatiana Volosozhar and Maxim Trankov are waiting for a baby!

Tatiana, Maxim, recently your coach Nina Moser made an official announcement that you will miss the whole season 2016/2017. She didn’t name the reason, saying that you will explain everything…

Maxim: Yes, we are waiting for a baby! Of course, we planned to have children, but it happened suddenly …

Tatiana: We wanted to perform this season at the Russian Nationals and European and World Championships, but everything turned out quite differently, plans have changed dramatically. We will skip this season.

Maxim: Of course, now I regret that we haven’t thought about children before. We have already missed one season because of my injury. And then it would have been wise to take a moment. It was right after the Olympics 2014. But doctors thought that I’ll recover quickly, and we were in limbo – so we didn’t dare. Now we are at that age – both of us are over thirty – that we must resolve: whether we’ll dedicate our entire lifes only to sport or will think about posterity. And as we have already won everything we could, the question about children has become paramount for us.

Maxim: After the birth of baby we will have a year to prepare, so we want to participate. Tatiana spoke with many girls, skaters, who gave birth, recovered and got back on the ice. With a strong desire it’s not so difficult to get back in shape. And biathletes and skiers, for example, even improve their results – due to the hormonal rise. Maybe we’ll benefit from having a baby. We had problems with motivation. There will be new emotions and new circumstances that may push us to next achievements.

Tatiana: Yet it’s difficult for me to give now a 100% response about Olympics. Woman’s body changes during pregnancy, and then feeding … Maybe I’ll gain weight and I won’t be able to get back in shape. Of course, now I’m especially watching my weight, despite the fact that I have never worked with nutritionists, good heredity was enough. Now every time before eating, I think for not to harm both baby and me. Well, I still can say that yes, I plan to get on the ice as soon as possible after giving birth. But I’m not used to make plans in advance, instead I’ll just move step by step to the goal. Frankly speaking, I really want to take part in Olympics. But at the moment the most important thing is the birth of a child. Then we will decide yes or no. 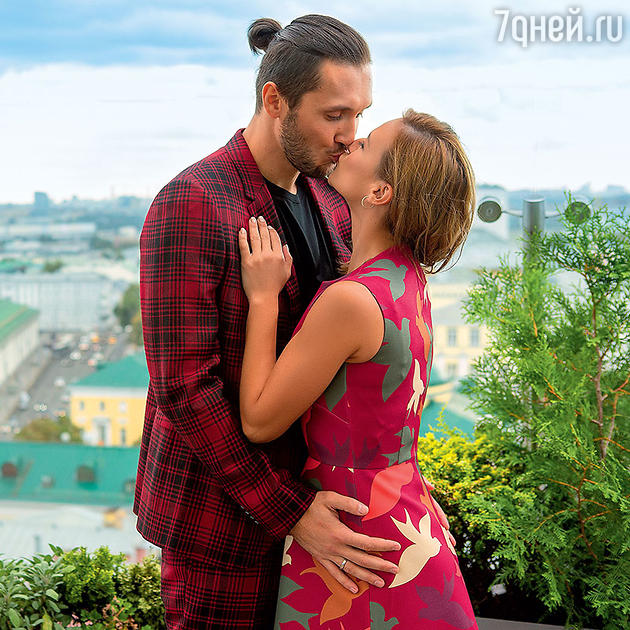 How did you find out that you’re pregnant?

Maxim: It’s a very interesting story. In summer we were in Japan, participated in the ice show. In the dressing room the Swiss skater Stephane Lambiel came to me and asked, ‘Maxim, is Tanya pregnant?’  I was surprised: ‘Are you kidding? Why did you think that?’ But he stuck to his guns: ‘Yes, she’s definitely pregnant! I can see how she skates,  she does elements not as usual. ‘  And it turned out, that he knew something we hadn’t known yet.

Tatiana: I felt something, but wasn’t sure. All girls, whom I know was saying: ‘When you’ll get pregnant, you will understand it immediately.’ But since I faced it for the first time, I had doubts. I’m such a person, firstly I have to make sure and only then to tell. I did a pregnancy test,  it was positive. I told Max, he was very pleased. But I still couldn’t believe it. Only in Moscow after going to the doctor, who told me the exact term – five weeks, I began to consider my pregnancy as a fait accompli.

Maxim, what did you think when you heard this news?

Maxim: That now I must work harder to support my family. I thought that the responsibility increases, previously I had one person take care of, now two.

Tatiana, since you have find out about the child, have you been on the ice?

Tatiana: Recently I have been, in early September we participated in ice show. Of course, the first three months of pregnancy are the most dangerous, but I trust my doctor, she conducted not one pregnancy of athletes. She allowed me to go on the ice, but told me not to do twists, forget about throws. After all, any fall is dangerous. But I can’t without movement, my body is used to work all the time. So, till the doctor allows, I will skate at least a little, three times a week.

Maxim: I’m very careful with Tanya. When I put her on ice from lifts, I check a thousand times whether she keeps balance, and only then continue.

Do you already know a gender?

Tatiana: We don’t know a gender, the term is still small – four months. Our baby will be born in February. Maxim, of course, wants a boy, but I don’t care, the main thing is health.

Maxim: Well, yes, of course I want a boy. Tanya respects my wishes, for her the gender is not very important, so she agreed on boy. (Laughter). Girl’s names we don’t even consider yet. Although, in any case in our house already equipped two children rooms. One for the boy in blue tones, one for the girl in pink.

Tatiana: Actually, I’d like to have two children. Let’s see who will be the first. If a boy, so we will wait for the second child – a girl. Or vice versa. 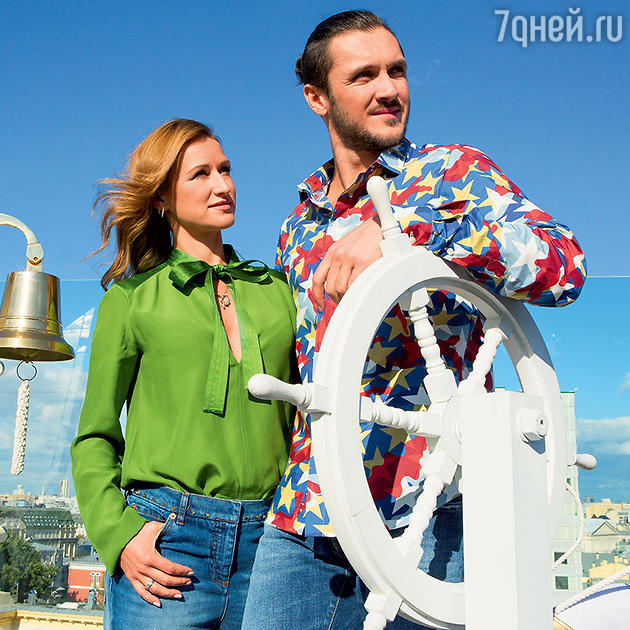 Will you give a child a double last name Volosozhar–Trankov?

Maxim: We’ll see. While we are joking, saying that girl will be Volosozhar, but like her father, such a cornstalk. A boy – Trankov, small, like mother. But seriously, we will discuss the name when time comes to get birth certificate. Then the name will be finally determined.

Now joint labour are very popular, have you thought about it?.

Tatiana: I will never call my husband to a labour, absolutely not! I believe that during pregnancy man sees how woman is changing, knows that it’s not easy. It isn’t necessary to watch.

Maxim: If I be there, I’ll only interfere and spoil everything! I worry about Tanya, even when she goes to throw garbage! And here…..labour… The very thought of it makes me feel real panic attacks. So it has been decided: at the crucial moment, I’ll be in the bar with my best friend Fedor. I know that I will be shaking, and I need someone to reassure me. I confess, I don’t go with Tanya to see doctor, and wasn’t present during the ultrasound. Though she is constantly say me, ‘You’ll be there sitting in a separate room, you will see everything on the small screen.’ But I say, ‘No, when born then I’ll look at him. Not now!’

Have thought about courses for young parents?

Maxim: I think Tanya will learn everything and then teach me. I won’t do it for sure. I also will unlikely go to yoga for pregnant women. Actually, I won’t have time. I’m skating every day, coaching juniors. And soon the next season of “Ice Age” will start and I’m taking part in it. Prior to that, I always refused from such shows. After all, I skate with the best partner in the world and didn’t know why I need to do this in pair with someone, who doesn’t know how to stand on skates. Why I’ll experience this? I have always said in the interview that, exept Tanya, I won’t have other partners. Then we sat down and talked, and Tanya brought this argument: ‘You know, if you are going to do nothing, then it’ll be impossible to drag you back to figure skating .’ Well, she knows me. I also need to maintain shape. In short, I agreed to participate in the project.

Tatiana: Maxim worried that I will be jealous. But, frankly, I completely trust him. Besides, I’m going to be present on the rink, and on the sidelines of the “Ice Age”. Now it’s time, when we are looking for ourselves, we think what else we can do in life. And if Max will work on television, I’m only for it.

Tatiana: Maxim has always treated me carefully, and now twice.

Maxim: Actually, I can’t say that our relationships became warmer than they were, but I feel that inside Tanya is sitting a small man. Yes, I always caress her tummy, let him, who is sitting there, know that his father is waiting for him and loves him. So, nothing changed  … It’s impossible to love more!  … My whole life, I might say, has been devoted to Tatyana Andreyevna!

Previous post
Elizaveta Tuktamysheva: the main thing for me is to go my own way
Next post
Sara Hurtado & Kirill Khaliavin