Olympics are over so I can get back to usual schedule. As you probably remember Friday is a day for Russian ice dance drama, endless and ongoing.

Elena and Nikita were our main newsmakers. Oh like old times. Elena and Julia opened their skating academy and announced a special guest for their first master-class. How surprised we all were that this special guest is Nikita. To see them on the same ice again, skating close to each other….shock) Oh all this smiles and Elena’s “Nikita has the best knees in the world”….They blew up skating forums. Elena knows how to drag attention….even during the Olympics where she’s not even competing) 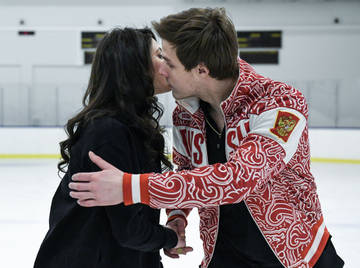 I have an idea. The Russian skating federation should send them to Worlds. No, no they don’t need any dances. They will skate at the 6-minute warm-up, steal the show and demoralise the rivals. Mission accomplished.

And on the background of all this talks, memories of old times, fans who saw some hope…..Victoria Sinitsina was posting photos of her and Nikita, her and his presents with comments like “One breath”.

Situation in Russian ice dance becomes more and more interesting. Ekaterina Bobrova and Dmitri Soloviev are not going to Worlds (Tiffany and John will replace them) and for sure are going to skip at least one season.

We announced that we are not going to the World Championships. We really gave a lot of energy to the Olympics. We skated there two programs in the team, and two in the individual competition. We bet everything on the Games. We gave everything and we are happy to have such an amazing ending of this season. Now Dmitri and I will take a break for a season, and then as God willing, maybe, we will return back to sports.

Finishing a career? Who knows. I want to have children. Dima is building a family. We want to try some other aspects of life. We spent our whole life in figure skating. Will see. If in a year everything will be fine and we will feel the strength and confidence in continuing our career, then we will definitely return, because we love it. – Katya said.

But there are some rumours that Dima may continue with another partner…..

There are also some rumours around Pavel Drozd….Since Angelique Abachkina and Louis Thauron splitted up and Angelique is looking for a new partner, some fans suggested that she can be interested in Pavel because he’s a good skater and they will look good together. I have no idea why, maybe because they both have curls)

Meanwhile Pavel is posting photos from his vacation….

What did we also missed? Betina Popova’s pictures from vacations

Previous post
Eteri Tutberidze: The girls has gone through the path of samurai
Next post
Evgenia Medvedeva: Olympics change people