Romain Haguenauer: First of all a lot of work

Translation of the interview with Romain Haguenauer for sports.ru.

Romaine shared his impressions of the World Championships in Boston, talked how to achieve the level of mastery of French pair, and also said that very soon Russian pair Stepanova-Bukin will be hard on Papadakis Cizeron’s heels.

First of all, let me remind, how happy you was in the Kiss-and-cry corner after Gabriella and Guillaume’s free program. It seemed to me that you was rather surprised with such a high marks, than happy because of victory.

Romaine: You are absolutely right. Of course, I was happy that my students have won, but 118 points for the free dance – it’s insanely high scores! We beat the world record in the free dance at two points, or slightly less, but I didn’t expect this. Gabriella and Guillaume got nineteen tens for PCS in the free dance. It’s an incredible result.

In the free dance of Gabriella and Guillaume you don’t see separate elements, each movement smoothly follows from the previous one. What’s the secret? How to achieve such level of mastery?

Romaine: It’s difficult to explain this process in words. First of all, it’s a lot of work. Of course, a big advantage in Gabriella and Guillaume’s technique – is this softness on the ice you’re talking about, combined with great strength and power of skating. They are capable of it technically, and they’re great dancers.

They’ve been working on this a lot with their previous coach, when they were still children. When they moved to me, they paid a lot of attention to the language of body movements. The secret is not just to fix certain position and to get the needed level of difficulty, it’s not just in technique, but to really dance on ice. I always wanted them to become not just good skaters, but also good dancers.

The music choice plays an important role. Besides, Marie-France, Patrice and I always strive to create elements within the choreography, not just to put elements in the program and create some dancing pieces in between. Perhaps, this result – is a result of skaters’ talents, diligent trainings and our common work.

There are a lot of critical comments, that free dance of Gabriella and Guillaume this season – it’s a simplified copy of last year’s dance. I’m sure, as a coach, you won’t agree.

Romaine: Absolutely. I believe that if someone doesn’t see the difference between last year’s and this dance, this person understand nothing in ice dance. For example, the music: last year it was Mozart, this year – modern music. Of course, the style of Gabriella and Guillaume will always remain this style. I don’t know any champions, who have skated clowns and circus in one season, and then classical ballet in the next. Gabriella and Guillaume don’t want and won’t play any roles on the ice. They always will remain themselves. Of course, the choice of music and programs will vary, but you will always see Gabriella and Guillaume on the ice, being themselves.

Speaking about music choice, is it always your choice?

Romaine: No, it’s a decision of the team. We are looking for music, each offers some options – I, Marie-France, Patrice … Then we listen to music on the ice and make a decision. Of course, along with Gaby and Guillaume, because they will be skating to it, they’ll need to express their emotions on the ice, not us. I can’t make such decision for them.

How creation of the new program starts? First, you select music, then you look for idea of the dance, or vice versa?

Romaine: Most often music appears first, as a support to the rest. Besides, it’s important to check, what athletes have already skated before and what they would like to do in the future, taking into consideration their personalities and abilities. 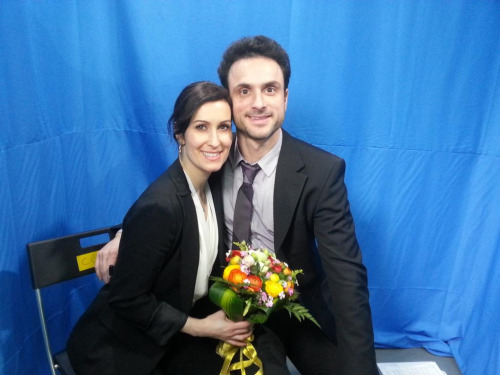 Once you coached Marie-France Dubreuil and Patrice Lauzon. How is it – to work with former students in a coaching tandem?

Romaine: It’s very simple, because I coached them over a decade ago. They were excellent students! Back then we have established a very good relationships, because we were about the same age – I was a too young coach. When I decided to move to Montreal and work in their school, all went very easy: we had the same view on  technique, because earlier they had worked with me,  we see the coaching process in the same way.

Of course, sometimes our opinions differ, then we talk and come to a compromise, to solution how to achieve the best result for the whole team. We always take into account the opinion of each of us. Marie-France and Patrice are very good people, so I’m happy to work with them.

Tessa Virtue and Scott Moir have decided to return, as a part of your group. Will you also work with them?

How difficult it will be to build a work with both of them: two-time World champions and Olympic champions?

Romaine: It isn’t difficult. Even if you ask ten or twenty coaches, I think, all will answer the same: we work with each athlete and try to lead each athlete to the maximum result. But, of course, in the end it’s skaters, who decide the fate of medals on the ice, and we can only stand at the boards, watch them and wait for the result.

The same with work. Neither I, nor Marie-France and Patrice can work with one pair better than with other. So, it’s to some extent an athletes’ task – to take the best from each of the coaching tandem and demonstrate it at competition.

By the way, when I was coaching Marie-France and Patrice, and they were vice-champions of the world, Delobel-Schoenfelder (European champions) also were skating in our group, so this situation won’t be something new.

At the same time, the competition in the group will increase significantly.

Three years ago, when they got to JGPF, they saw many senior programs for the first time, because they’ve never been interested what someone else was doing. They always wanted to do something own, that is why today they are so different from the others.

They’re not fans of ice dance at all, they even didn’t know the champions of past years and didn’t watch figure skating at all. To be honest, they still don’t like to watch their competitors at competitions. They just skate. I think it’s good for them that they don’t focus on competitors, but only on themselves, on what they do and what they want to achieve. 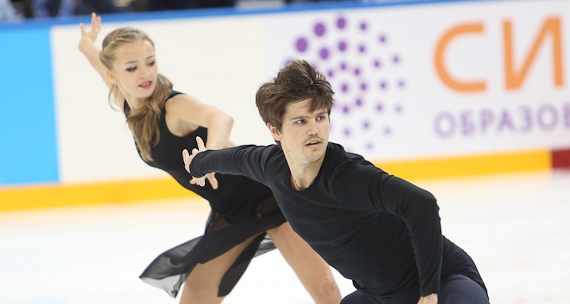 If the conversation turned to the competitors, maybe you had a chance to look at Russian duos?

Romaine: Of course. Honestly, I haven’t seen free dance, because I was in the warm-up hall with Gaby and Guillaume, but I really like two Russian pairs. They are very different! Sinitsina and Katsalapov – a new pair, but they are already very interesting, they have very beautiful lines. Katsalapov is very experienced skater, and his experience certainly helps in tandem with a new girl. They just need time to gain the chemistry on the ice, when partners understand each other perfectly. I think they showed pretty good result at Worlds.

I know Stepanova Bukin from juniors, because they were the main competitors of Gabriella and Guillaume. They are good guys and a great team, and I think that in the very near future they will be hard on Gabrielle and Guillaume’s heels.

And the last question. In one of your interviews few years ago you said that there is no such ice dance diva, which was Anisina or Bestemianova. You also said that Ilinykh could become such diva. But then she was still too young. How the situation has changed now? Has diva appeared?

Romaine: It’s a provocative question (laughs). I think, back then I was right. If we are talking about today’s leaders, I wouldn’t call Gabriella a diva. I would say that today the union of Guillaume and Gabrielle is very special, that brings something new to figure skating and possibly contributed the popularity of ice dance in France, and perhaps in other countries.

I know that in France, many people who have never watched figure skating, and generally don’t like the sport, decided to follow the career of my team. I think it’s important that today’s World champions lead the next generation of children to ice dance. That’s the main thing.