Rafael Arutyunyan: some coaches cling to an athlete like to a rocket

Translation of Andrei Simonenko’s interview with Rafael Arutyunyan. Interview was made at Trophee de France during ladies’ practice.

Rafael, when you look at Medvedeva you probably think how you and Ashley Wagner can beat her?

– In no case! I just watch and note something for myself, as a coach. I think such question is incorrect. Just sometimes I have to read comments like ‘In America Harutyunyan prepares rivals for Russian girls.’ But I, for example, trained Masha Sotskova when she came to our training camp. In that year, she grew up a lot, her jumps fell apart.  She spent almost the whole summer in our group and at the Russian test skates showed a high level of readiness for the season, and then proved it with her results. This year Elena Radionova came to us, my assistant Nadezda Kanaeva did a program for her. I also took some part in the process of choreographing and in general I cheer for Russian guys, especially since my former students still in their national team – such as Sergei Voronov. Maybe tomorrow I’ll coach some other Russian girl or man. And a day after – a Frenchwoman, whose coach asked me to give advise. I’ve said it many times and will repeat it now: we should forget this ‘ours’ and ‘not ours’, especially coaches of my level. We work with everyone. I coached Russian champion Alexander Abt, US champions Michelle Kwan and Sasha Cohen, Canadian champion Jeffrey Buttle, Japanese champion Mao Asada. So whose coach am I: Russian, American, Canadian, Japanese?

Man of the world.

– Exactly. I help everyone who wants to work with me. If someone asks I’ll let him come to the rink and then watch how he’s running and jumping until I understand what he really wants and how can I help him.

But at the World Championships Ashley was fighting for the gold, wasn’t she?

– Oh, completely different people were fighting for it. American Federation was betting on Gracie Gold, and it’s not a secret. Ashley and I just were so prepared for that Championships that we got where we got. I prepare each my student as a potential champion. For example, now Michal Brezina trains with me. In my opinion he trained little and poorly. It’s hard for him, he’s no longer a boy.  The first thing I said to him: this season European Championships is in your hometown  Ostrava, you can’t skate badly there. And everything fell into place. Now he at least tries. We’ll see what will turn out, but I will try with all my knowledge and experience to bring him to that level, so at least I won’t be ashamed. Because It’s my job.

Korean skater recently tried to do a quadruple jump. How do you think will the breakthrough happen in this direction?

– Of course. Especially among children.

But then it’s nowhere to go – it’s necessary to change the age of eligibility for senior skating?

– I have said it many times: quads are harmful in young age. Bones are unformed, still growing. There would be injuries. We already has it in pairs – girls land from such a height during quad throws…. But it’s necessary not only to forbid children to compete with adults. It’s necessary to make the gap in prize money – between junior and senior competitions. After 18  they can participate in senior “Grand Prix” and receive a prize for say, 40 thousand dollars. And in the junior “Grand Prix” we shouldn’t give for victory more than 200-300 dollars – so there will be no motivation to risk children’s body. To have another motivation – to save your body for the senior competitions, and there make money. You learned a quad at a young age – well done, train it periodically, prepare your body for adult loads. And after 18 years, grown strong, you’ll come and collect what you deserved. Skaters have neither spear or a tennis racket. They have only body, they should take care of it.

Did Ashley’s attitude to work change after silver medal at Worlds?

– I had a serious conversation with her in the summer. I waited, waited for her to start acting normally, but I realized – it’s hard for her. And it’s really hard at her age to start each new season. Motivation passes. She dreamed of becoming a prize-winner at the World Championships, she did it – and then came devastation. I called her to talk, and said: If all this continues, you can finish working with me. Why else to skate if not to win? In California is heat – go on the beach, why go to the ice? We are not polar bears or penguins. I gave her a week to think it over. She brought herself in order. You know she has enough money, if she raised her hand and said ‘I’m free’ a million of “passengers” will come to her. After all, we have different coaches. Some are responsible for what they do. Others – “passengers”. You know, skater is like a rocket flies upwards, and they cling to this rocket. So, I told her, ‘There is plenty who wants to cling to you and to sit with you in the Kiss-and-cry corner’, which I honestly hate.

Why do you hate it?

– Because not always there is sittin the one who raised an athlete. The work is done by one and the other is sitting there. Trained for a month and sat down. And for the one, who coached for six years, it ramains only to tell as much as possible, that it’s his merit. But the visual analyzer is stronger than hearing. People see the inscription, see the person sitting in the “Kiss-and-cry” – and they have an entirely different picture. Do I need to explain them that everyone has his own understanding of decency? And how can I judge this person if this is normal for him? There are people who train themselves to do bad things. And after some time, these things become the norm for them. It’s ok for them to take athletes in two years before the Olympic Games, cling to them, as to the rocket – and fly up to the paradise. 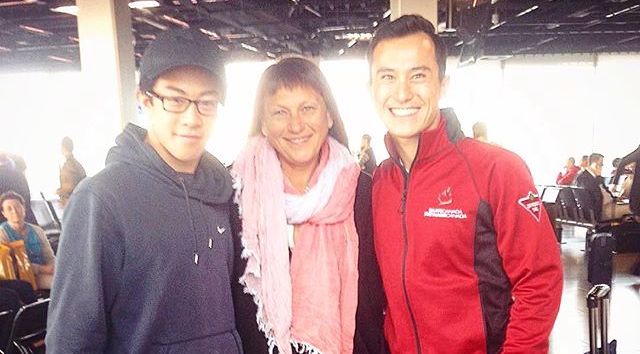 Since we have moved to the hottest topic of the season, you can answer a direct question – did Nathan Chen leave your group? In the broadcast from Paris titres reported that his coach is Marina Zueva.

– Before the grand-prix in Paris, he called me and said: I’ll see you here, we’ll talk. I said – okay, if you’re going to announce a change of coach, warn me, please. There I was approached by representatives of the media center and reported that Zueva asked them to change the name of the coach in the protocol. They asked – who is still his coach? I’m such kind of person who won’t look after someone and ask ‘Did you do an official announcement or not?’ So I answered: ask him. I doubt they actually asked him. He’s a child, he’s only 17 years old. He came here with four quads to try them all. I don’t think he’s interested in playing this games. I think the responsibility in such cases is on us, the adults, on our decency.

How did it happen that Chen went to Zueva?

–  He went to her to do a program. Everyone goes to do their programs – someone to Lori Nichol, someone to Jeffrey Buttle, someone to David Wilson, someone to Shae-Lynn Bourne. But they all come back. But from some dance coaches from the former USSR – sometimes not. And here I should point out that this’s their profession. They are professionals in these matters. My profession – when the rocket is flying down, I pick it up, lifted up its nose up and to try to push. Whereever I can. I pushed Ashley Wagner and Adam Rippon – and have pushed them up to some level. And some one, as I said, cling to these rockets.

– There’s an interesting situation with her. I still have our texting in my phone – 54 her messages and 4 my. Only when she said that she anyway go to California for competitions and want to meet there, I said – let’s meet. She asked me to help her in tandem with her coach Kori Ade. I said, first tell to your coach, if she agrees, than we’ll start. I’ve already had an experience of working in tandem: I worked with Jeffrey Buttle and his coach, with whom he worked since he was seven. In the end, Battle became the world champion. Mariah went to the coach, and she refused. But Bell said, that she’s leaving anyway. Will you take me? And I was thinking and thinking and finally agreed. But I still keeping the history of texting – it’s calmer for me. So, no one can say that I acted dishonestly. That’s my attitude.

Are you sure that Chen didn’t express himself a desire to say?

– I know how they do it. Came and said a few nice words: you’re cool athlete, I know how to help you. In fact, they’re offering a baby-sitter services. And I haven’t even said a word to an athlete untill we start work together. I can only repeat once again: someone can presume this, some one do not.

How to make sure that such things won’t happen again?

–  Other sports have contracts. We do not. We’re so serious only in words. Yes, nothing serious – sitting, having fun … Sit in the Kiss-and-cry, clap on the shoulder, make head nod. Of course there are people, who knows who did the work, and who came to sit. But the audience is not aware. If I ask you to sit there – they will assume you are a coach.

Can Nathan become an Olympic Champion?

– If he will jump and nothing happen…..But while he’s a dropout. I did not have enough time to teach him axel and salchow. It remained to stabilise this two jump and then grow up in terms of intelligence. After all. program components are not actually an intelligence. He’s not a bad guy, a little stubborn, and he’s clever, but for it was always difficult with him. My team and I found a common language with Adam and Ashley. They’re training, improving and do not go down like the majority of skaters of their age.

If Chen change his mind and will ask to take him back – will you take him?

– It depends on how he’ll ask.

PS After this interview, Harutyunyan said that Chen came to him after the competition in Paris and asked to put him on the ice at the Grand Prix in Japan.

Previous post
Cup of China 2016: Check-in
Next post
Elena Radionova: in Moscow I was very worried about Julia Lipnitskaya

5 Responses to “Rafael Arutyunyan: some coaches cling to an athlete like to a rocket”