Nikolai Morozov: Amodio should have been on podium in Bratislava

Florent Amodio finished his sporting career after the European Championships in Bratislava. Finished with incredible performance of the free program! So, it seemed he should get a bronze medal….his last medal. It didn’t happened and his coach (he returned to Nikolai Morozov to prepare for his last competition) believes that Florent deserved a medal.

With such performance Florent should have been on podium. Honestly, I’m sad that it didn’t happen. But now it’s no globally. The main thing is that Amodio before retirment from the sport, have earned the name in figure skating due to his  uniqueness, dancing and artistry. He deservedly went into the history of the sport. Working with him was a major segment of my life, so today I couldn’t hold tears after his performance. – Morozov said.

Nikolai is also sure that Amodio will have a successful future:

He is studying journalism. I’m also sure that he will have a lot of offers from tours and shows. The audience knows and loves him and a successful future is is waiting for him.

To the question whether Morozov plans to work with some Russian men, he replied:

So far I have no desire, to work neither with women nor with dancers.

I was very tired of ice dances after the Olympics in Sochi. I don’t even look it. Now it’s time to give all my strength to my daughter. She needs me now, and I get genuine pleasure from the fact that I create programs for her. However, she does singles and ice dancing. It’s still early to talk about success but after a year or two, we can return to this subject. – Nikolai Morozov said.

Nikolai Morozov skating with his daughter Annabell in show: 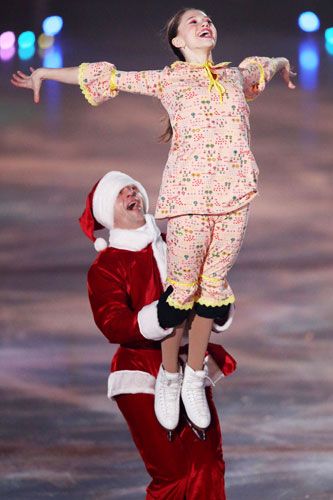 One response to “Nikolai Morozov: Amodio should have been on podium in Bratislava”