Here is my fashion results of the short dance at Junior Grand-prix Final 2015 in Barcelona. 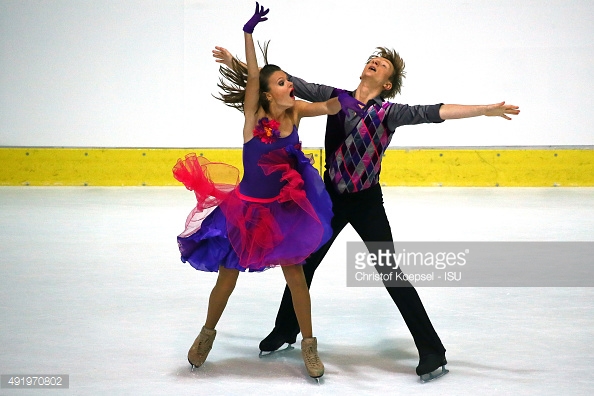 I like the idea of using bright colors (especially for juniors) but it was a little bit too much. Bright colors, flowers, gloves, asymmetrical print on the waistcoat….Something need to be removed. This costumes looks retro and it’s not a compliment. 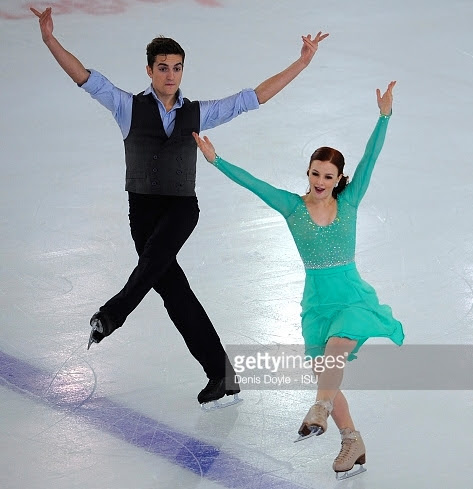 I like simplicity in costumes, I like when costumes looks close to real clothes but sometimes that is not enough. I like her minty dress. The waistline is on the right place, the bodice nicely decorated with silver sequins, I also like dresses with sleeves because it helps to make arms movement more expressive. I also like the back of this dress it gives some retro notes (in this case retro in positive meaning). But i wish they have thought of something more interesting for the Romain’s costumes. Good costumes but not memorable. 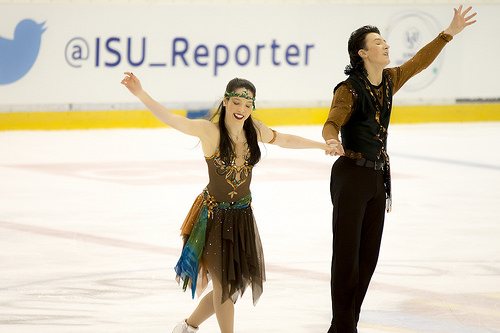 This costumes could have gave the impression that this is also too much. But this variety of details is justified by chosen theme of the dance. Lorraine’s skirt looks great in motion (but I would remove some layers). Blue with green belt adds needed bright accent (I also would remove this flower brooch). I also like the headband, interesting and in stylish. Interesting ornament on bodice but the dress top could be more sophisticated. Quinn’s costume is made in a darker color palette to make an accent on Lorraine, but all pieces of his costumes is well fitted to the body. And in my opinion brown is not the best choice for ice… 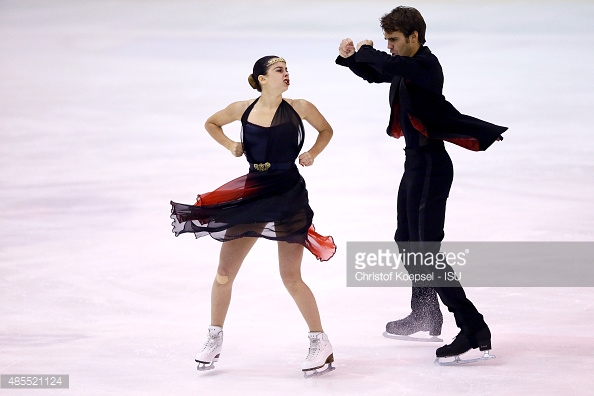 Betina has interesting dress for her magical and a bit demonic program. It has a bit of antique look and looks fashionable. I like the idea and the skirt, it looks good in motions. But the length of skirt seems to be a little bit dangerous, I’m always worry that that the blade of her skate will cling the skirt (especially on twizzles). I also like the accessorizes. Yuri’s costume is dark and simple, but I like the scarlet lining in his jacket.

Perfect choice of costumes for the “first bal” dance. It’s a rare case when I like the male costume more. Pavel looks amazing in the full-dress uniform, noble and romantic. Costume is done wisely, all the necessary details are added, but it doesn’t overdone and doesn’t look heavy. I also like the chosen colors. With dark uniform this light green (almost fashionable minty) looks good emphasise girl’s tenderness. All A’s dress made in empire style according to a historical epoch but it’s not a perfect silhouette for the ice dance (in motion the skirt takes the shape of a bell and gives this “pregnancy” look) this prevented me to poot this costumes on the first place.

Nothing can be better than beautiful waltz to a classical music in marvelous costumes. They were definitely the prince and the princess of this event. They look elegant, expensive and royal. I like that for Cinderella program they didn’t chose a traditional blue princess-dress. There’re lots of sparkling crystals on Rachel’s dress but they were used wisely. Great choice of nude illusion mesh (it’s also happens rarely). Michael’s costumes looks simple, but it also very well fitted and look elegant! Great choice of color pallet, stylistically they did everything to look fantastic!