Interview with Irina Slutskaya about the results of Grand Prix Final, which caused a storm of negativity from Alina Zagitova’s fans. 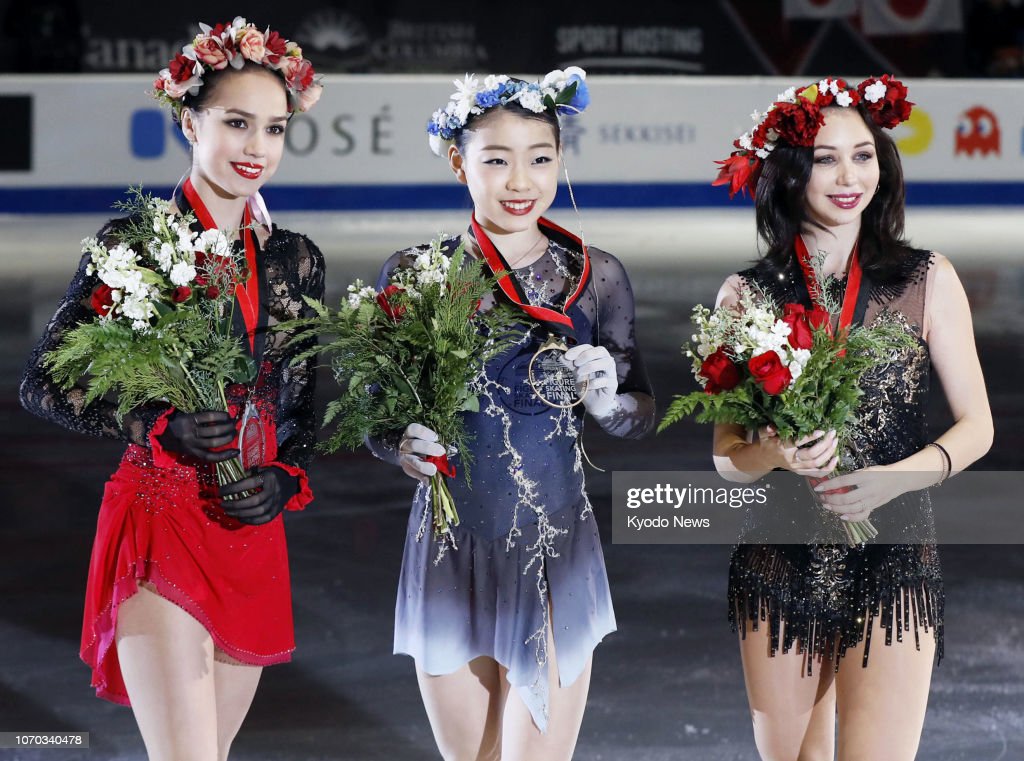 – The competitions were held at the highest level. Of course, our juniors are superb – both in technique and presentation. It was incredibly interesting to watch the fight between Russian and Japanese figure skaters in senior skating. Now I rarely watch figure skating, but this time I watched with great pleasure.

Who impressed you the most?

– I really liked Tuktamysheva. I always rooted for Liza. This athlete has already walked through hell and high water and in Vancouver she showed bright, technically difficult skating. However, she did it all so easily that I wanted to go on the ice and jump with her. In my opinion, she should have been second in the Final.

I really liked Rika Kihira, who became a worthy competitor to all our leaders. Unfortunately, Alina Zagitova could not avoid small mistakes and didn’t show the maximum of what she is capable of. I was pleased with Sofia Samodurova, who showed good, quality skating. It was interesting to watch senior skaters. Many of them, but not all, had good, balanced programs where jumps intertwine very elegantly with interesting transitions between elements.

If we talk about juniors, then Alena Kostornaia was off the charts. She has grace, filigree skating, which I can’t say yet about Alexandra Trusova. She has a fantastically difficult technical content. It is a pity that she failed the second quad lutz. But the thought that such a young athlete performs quad jumps, puts three such jumps into her program, alone is driving you crazy. But the second mark needs more work.

It’s great to see that there are no questions to our juniors in terms of technique. Now, some jump lutz from the inside edge, and now they pay attention to it, but our junior ladies are very clean, they are perfectly taught. Skating itself, spins are at the highest level. I hope that when they grow up, they will not lose anything, they will only gain. Our third girl, Alena Kanysheva, also skated very well.

In what moments is Kostornaia superior to rivals?

Could her PCS be higher?

– It is a pity that Kostornaia can’t perform in seniors this season. I hope that by the next season she will strengthen her position and move to the senior level as one of the strongest figure skaters.

If she performed in seniors, she would get more. Because junior and senior skating are judged a bit differently. Everything is very harmoniously in her skating. Each jump Alena do from with interesting transitions, steps. She doesn’t just do a spiral and jump, but weaves steps, steps, steps, and then jumps.

And her jumps are light and beautiful. I really enjoyed her skating. If you look at all the junior ladies, then Kostornaia is exactly that skater who is absolutely ready to move to the senior level. I wish her good luck. It is also interesting to watch her because she is different every year and in a different program. It often happens that take away the music and the costume and the same skater will remain. This is not about Alena.

Does her axel have a reserve for one more rotation?

– She has a gorgeous axel. It seems she has a reserve for two extra rotations. They say she jumps triple axel in trainings and jumps it as confidently as double. I really want Alena to keep this lightness, this pleasure from what she does on the ice. In her skating there is no burden of responsibility, which now disturbs our leaders. Now they are hampered by the burden of victories and the formation of the body, and it is clear that they are careful with some of the jumps, because they cannot “lose face”.

You said that Trusova needs to work a lot on the second mark. Do you see imbalance in her program?

– Yes. Her jumps are off the chain in terms of difficulty, this is energy. But in the second mark, Sasha lacks a lot. This is not the fault of the athlete, it’s rather because of her age. With the current judging system, sometimes it’s better to jump a combination of two triple jumps, make it clean and get good points, than fall from a quad. Someone gambles and someone just makes calculations. As we see, even with two quad jumps Sasha lost to Alena. It’s not a fact that she would have beaten her even with a second lutz. Still, the total score for the program is a combination of two marks. And when the gap between these mark is large, it is more difficult to fight with competitors.

Women’s figure skating is technically growing, and growing with tremendous speed. Kihira at the age of 16 jumps triple axel. I think in the next few years it will be a fight of quads. But let’s see which of the current skaters will keep their technical base at the senior level. I want them all to continue to show what they can do now. The main thing – do without injuries.

Who is the future for: skaters with ultra-c or those who skate perfectly without such jumps?

– It is hard to say, because the result of ones forces the others to go further. And you need to take some kind of decision: to stay at the same technical level or try to learn something new. While two quadruple jumps lost to clean performance of classic elements. Combination lutz – loop skaters jumped in 2005, jump now. But Kihira, for example, set a new standard. But if even with the cleanest execution of your program, you still cannot reach it, then there is no other way out, you need to come up with something new. Or you will be left behind.

On the other hand, the triple axel and quads are partly a tribute to fashion. Like with clothes: there were three-quarter trousers and then long ones were fashionable and many would change clothes in accordance with fashion. It is difficult to say whether such jumps will stay in women’s skating or not. In our time, Sasha Cohen, Miki Ando tried to quad salchow, but then everyone went to the level of triple-triple combinations. I’m sure that Kostornaia won’t stop at what she is doing now, she will definitely go further.

As you said, Tuktamysheva should have placed second. Did judges hold her in marks?

– We shouldn’t forget that Liza skated at the same competition with the Olympic champion, to which a completely different attitude. Plus, Tuktamysheva spent several years on the bench. Of course, there’s a certain distrust in her from the judges. To return it, she needs to be better and better from competitions to competitions.

As for me, she did everything clearly and easily, with a small mistake on the triple axel. But the GOE was very small. Leaders get +2-2,5 and she only get +1. I hope this situation will change. Sometimes judges forgive champions some small mistakes, under rotations, wrong edges on the jumps, but not her. Figure skating has always been and will be a subjective sport.

At the same time, Kihira got the same PCS as Zagitova at the fourth competitions of the season.

– Ok, If Rika Kihira makes all her elements, she is level above many. Well, Kihira hasn’t disappeared anywhere – she came from juniors. But Liza, unfortunately, fell out for several seasons, they have already forgotten about her. Restoring trust is always difficult in figure skating. Kihira is gorgeous, just gorgeous. She broke into the Final with two victories and skated great in Vancouver.

Above many, but not above all?

– While I wouldn’t give such judgment. But Kihira is above many. With her appearance at the senior level, firstly, it became much more interesting to watch figure skating, and secondly, our girls got a very worthy rival. She makes others nervous, and they have an additional burden, responsibility. This is already a real battle, and it’s much easier for Kihira in this fight, because she has nothing behind her. This is a completely different matter than when you have medals and titles on your shoulders and there is a notion that you have no right to make mistakes.

That’s exactly what Alina Zagitova told after the Final.

– And it will be even harder. When you skate and see only one competitor, last season it was Zhenya Medvedeva – this is one story, but when several skaters try to step on your toes – that’s completely different. At the same time, with the clean performance she’s not the first by the technical level, and this’s anxiety. But you need to learn to go on, fight and win again. It is difficult, who argues. In Vancouver, Zagitova made a small mistake in the short program, when the loop in the combination was under-rotated, she landed on the toe peak, started to worry and didn’t skate the free program as she could.

Will we see the former Alina or will we see a completely different one, but also strong?

– Logically, athlete should never stop. You must always go forward, change something, look for an approach to yourself. In no case you can stand still, as well as look back to the past. If you make mistakes in the development process, there is nothing wrong with that. You need to fight. And the fight is interesting now, and there are enough girls who are ready to join this fight. Alina’s advantage is that they forgive her some things as an Olympic champion. But such things will not last long. Visually, she became much more cautious, began to worry, which she didn’t before. But Alina matures, her skating becomes conscious. I hope she will cope with all the difficulties.

Will Zhenya Medvedeva be able to claim at the Russian Nationals for a place in the national team for the World and European Championships?

– I can’t predict something. Of course, the fans want to return of that Zhenya, who fought for the highest places. But it is very difficult for her because she sees that the new generation is growing, how many skaters have already reached a high level. The fight for a place in the national team is very serious. Any small mistake can cost a place in the team. What can I say? Only that if she misses the second half of the season, nothing terrible will happen. I say this based on personal experience.

Will Russian Nationals in women’s skating will be the most interesting competition in recent years?

– It will be the most difficult and nervous competition for our skaters. I think the fight for three spots to World and European Championships will be between four athletes: Alina, Liza and Sophia we have just seen in Vancouver, and I think Zhenya will interfere in their fight. I won’t not be surprised if Alena Kostornaia becomes the national champion.

Previous post
Elizaveta Tuktamysheva: I’m pleased that in the Grand Prix Final I’m the oldest athlete, It flatters me
Next post
Alexander Zhulin: I wanted my athletes to be as close as possible to the French pair

3 Responses to “Irina Slutskaya: Athlete should never stop. In no case he can stand still, as well as look back to the past”