Recently was announced that Elena Ilinykh and Ruslan Zhiganshin will try to work with Igor Shpilband. “To try” not “to change a coach”. Why? First of all, because the Russian figure skating federation prohibit all officially changes of coaches before the end of the season. So, maybe Elena and Ruslan are just waiting when it’ll be possible to announce it officially as a change of coach. Or, maybe it’s just the tryouts and than they will decide whether it was a good idea.

Here are some parts of Elena’s interview for Elena Vaitsekhovskaya, where she told about the motivation for such decision.

Very difficult situation appeared after we finished fourth at the Russian Nationals and failed to qualify for the European Championship. Many costs for the previous two seasons we had to pay out of pocket. For example, to pay for work of Spanish choreographer Antonio Najarro in your first joint season, have been spent money from those that I received as a prize for the Olympics.

This season we have privately paid Najarro’s work and work of second choreographer – Alexei Arapov. Plus there were many other expenses – to pay for needed experts, their travel costs to our training camp. For preparation for this season Ruslan and I gave all the money earned at the World Team Trophy last year.

So, at some point we realized we have no money for new programs. Or it would be very “budget” option. We decided to appeal to the sponsors, to understand, whether we can count on the financial support for the new programs.

We got the support. And together, we decided to change radically the system of training and seek the assistance of Igor Shpilband. I think that this decision should give a new impetus to our development. And we are very grateful to the people who believe in us and ready to help. – Elena said. 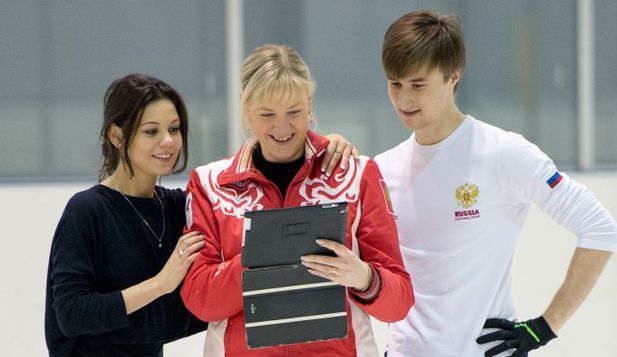 About Ruslan’s reaction on this change and relationships with current coaches:

Ruslan is well aware that we had reached a kind of impasse. And he’s ready to take advantage of any chance to get out of this impasse. It is very difficult topic for us, actually the whole situation. We are very grateful to our coaches for everything they did for us and still continue to do. After we told them that we want to try to prepare for the season with Igor Shpilband, we still continue to practice and work together.

But ice dances are becoming more and more complicated and complex discipline. Besides , it seems to me, that at times Ruslan is very lacking in male coach, who can explain all the details of partner’s work.

And we will come to Moscow in late May – will decide with our coaches how to work further.

Of course, we did not expect the fourth place at the National Championships. Even though the fall happened.

About competition in Shpilband’s group:

Yes. Igor immediately warned us that he will be able to give not so much time in day. But he sent us a sample lesson plan, which is planned detailed since early in the morning and includes work with a variety of specialists: Fabian Bourzat works as the second coach in Shpilband’s group, who helped us vety much when we with Nikita Katsalapov trained with Alexander Zhulin. Plus – choreographer, plus – specialists in lifts, ballet. On February 29, for example, at Igor’s group will start the training course on “hip-hop”. We we told that if we get to Detroit before this date, Igor can sign us in the lesson plan.

Igor also said he is well aware that such a system is unusual for the Russian athletes. But it works. In fact, it’s exactly what we are particularly looking forward. You’ve already known that Tessa and Scott the sport return to sport.

We have no other choice. Either to go for broke and risk, or finish with figure skating. Now, I think we have a very big chance – there are people who are ready to invest money in our training. We have to prove that we deserve such help. – Elena said.

link to the original interview

Personally I consider this change with a slight optimism. But there’s still a big percentage of possibility that this change won’t bring them expected results. Why? I’ll try to explain:

But Igor can give them the systematic trainings, and the competition in the group can also be a plus. Igor is also a very competent coach who know the rules very well and who can defend the athletes before the judges in contentious situations. So, I still consider this change as positive. First of all because they realized that they need some changes in their training process. That’s the most important! I’m really intrigued to see the results of this collaboration!