We haven’t got an opportunity to see Madison Hubbell and Zachary Donohue free dance at Trophee Eric Bompard, but there are some photos from the trainings on Tumblr. So, we have a chance to glance at their costumes to the free dance. Seems it’s a costume change.

At US International Figure Skating Classic we saw this costumes: 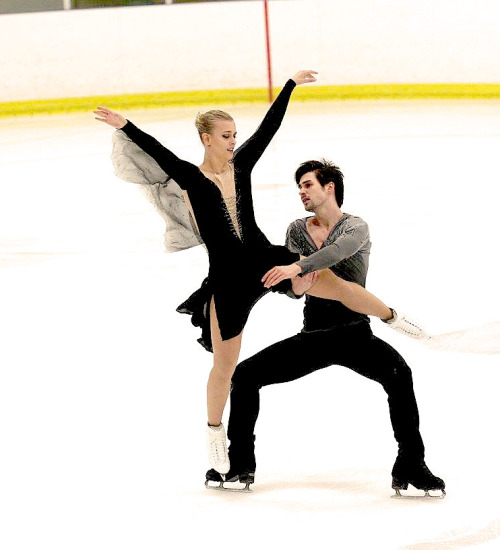 At the trainings before Trophee Eric Bompard Madison and Zachary were in another costumes. So, is it a change or just a clothes for trainings? I think it’s a costume change. 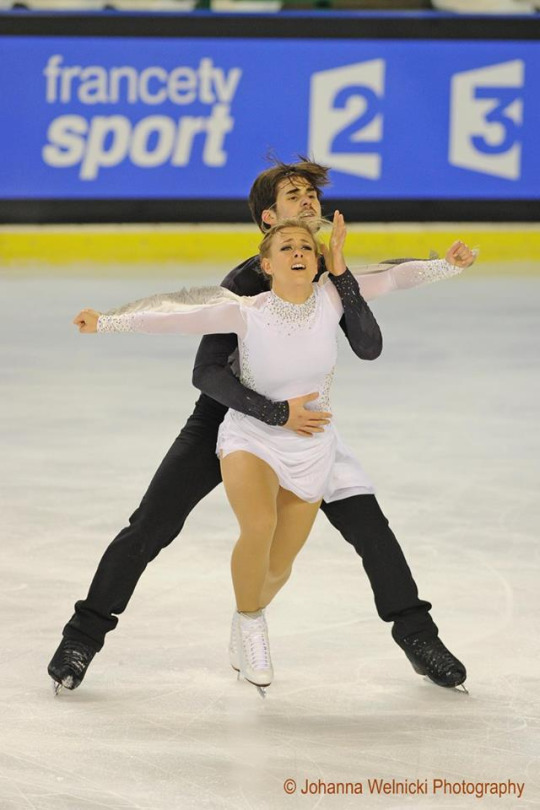 They kept the idea, but made it in lighter colors. I didn’t like the first variant but I don’t like the new one too. Black costumes were more graphic and highlighted the moves better. The light ones make the program not so dramatic, because it already has a very dramatic music. So, they tried to add some uplifting into this program to keep the balance. But I don’t like how this color is looks on Madison, the cut and length of the skirt are also not a best decisions for her.

The idea with “wings” on the sleeves of the Madison’s dress also looked more impressive in black and grey combination. New ones are shorter and of light grey shade that hasn’t a contrast look with the whole dress and ice. So, they made this idea of wings less expressive. And that’s what I don’t understand. If you like the idea make it noticeable and expressive or don’t do it at all. Of course we need to look it in motion in combination with music, but even on photo the black variant look more interesting.

As for Zachary’s costumes. I like both options. Simple trousers and shirt, nothing distracts from skating and the whole accent is on Madison with her wings. But yet I like the first variant more. It was more complicated in terms of finishing.

Whether it was a costume change or just a set for trainings we will know in two weeks at NHK Trophy. But I wish they have thought of something different for their free dance.

See also my revew on Elizaveta Tuktamysheva’s new dress for the short parogram.

Previous post
Decision about Trophee Eric Bompard is made?
Next post
Julia Lipnitskaia broke up with Eteri Tutberidze