Evgenia Medvedeva: All these failures helped me to open my eyes 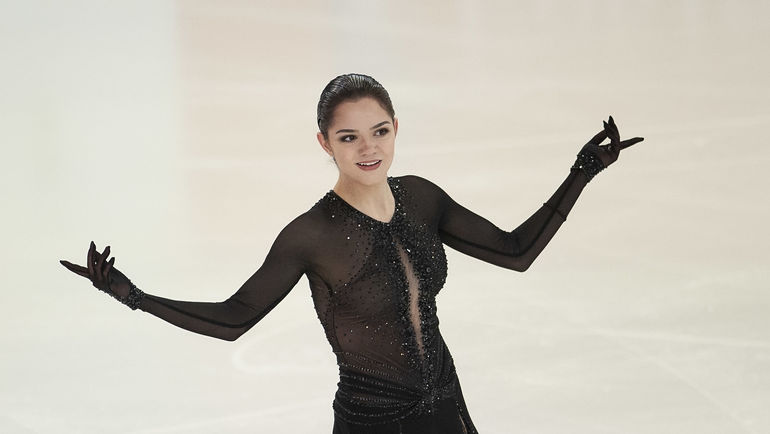 They bathed you in love after different comments.

How did you spend this day?

– I tried to distract myself, but at the same time to keep focused on the program.

You came here in good shape, you showed it at practices. Have you made any conclusion for yourself how to get your mind right for competitions?

– Well, I didn’t find out a particular formula (laughs). I took into account that no matter what you do you need to believe in yourself and in those people who are around.

Even the great champions’ experience shows that changing the program during the season is not always good idea. What made you to change the short program?

– I think it was for the best. I’m in a more comfortable style for myself. I like the program and I think I skated it well. I’m not talking about jumps, there were some problems. There are technical and psychological problems. I think everyone understands this.

Tell us a story how you read comments in social networks yesterday.

– Yes! Before the Russian Nationals, I decided that after competitions I would be back on social networks. I think that today I will have a live stream on Instagram (laughs). There are so many people who support me. I noticed how much less negative it became. This makes me happy. There are some who jump out, say something and hide. But there are fewer and fewer of them, because I have very strong, intelligent and sharp-tongued fans. So everything is quickly removed.

Did you know that your fan club was preparing a flash mob with hundreds of roses? They were also giving badges for everyone.

– Honestly, I found out about it only today, when I opened social network. I didn’t fully understand what was the point, and what was distributed. But I’m still getting roses, yes (laughs).

Before, you always had such a confidence. This season there was anxiety. Where does it come from?

– I can’t say that before I didn’t worry. I did. My knees even shook before the start. First of all, to be honest, there were other people behind the board, this affects. When you turn around and another person is standing there. Little time has passed since I’ve moved. I was younger then and it was easier to control myself and my nerves. Now we must look for new methods. Still, there is such thing as “safety margin” which sometimes dries out. The psychological safety margin is the most fragile.

Your style, attitude to life and mentality are changing. How much do we see from the old Zhenya and how much from the new one?

– I’ll tell you a good example. Yesterday, before practice, when I was warming up in the gym, the coaches came in and one said hello. I turned and said loudly, “Good morning,” and he didn’t even respond. Then he asked: “Did you say hello to me?” I said that yes. He answers: “I’m sorry, I didn’t react. It’s just unusual that you’re so cool, so open. You greet all the time, even smile. A year ago it was impossible to think that you are such a cool person.” For me, this is a vivid example of how I have changed. I hope that this will not discourage me as an athlete, but will only help me to move forward.

Does it matter for you what place you will take at the Russian Nationals?

– Not anymore. After the 14th place in the short, I will be happy even with the 10th (laughs).

Tatiana Tarasova came to you after performance. Did she tell you words of support, or maybe she gave you some valuable guidance?

– Both. Of course, I listen to her words, Tatiana Anatolyevna supports and inspires me a lot. She even came to the practice this morning! She was standing next to Brian. I experienced strange feelings, turned round and see: Brian Orser and Tatiana Tarasova!

– No, on the contrary, such support from such people lighted something in me. I also want to say thank you to Alexei Yagudin, he came to kiss and cry and supported me.

You are so supported by the audience, but there is a lot of negativity on social networks. Maybe you can ask your fans to bury the hatchet?

– You know, I am such a person … I have no right to tell anyone what to do. Each has its own opinion, each has its own character. Maybe someone has problems in family and this person decided to pour out his negative on my page. I’m not going to urge anyone to anything, I’m not a social activist to hold demonstrations with posters “No to negative comments”. This is all nonsense. People should have their own head on their shoulders and, thank God, my real fans, who are now sitting on the stands and watching figure skating, they have their heads on the shoulders.

When you went to Orser, you probably have imagined what it would look like, what would happen around …

– Those expectations have not been met.

What are the three things that surprised you the most in Canada?

– The first is the “Curling club”. I saw only the arena on some photographs and videos. When we arrived at the rink, I asked: “Where is the rink?”. The club looks like an ordinary family house, with a wooden roof, there is an arch with a writing “Curling and skating club”.

You go inside – and there is a huge room, which a curling arena and figure skating arena. That is, it’s like a Pandora’s box, when you go inside, you don’t expect that there is a two-level gym inside. I don’t understand how it all fits in such a small building.

The second is training time. Sessions are very short, from 50 minutes to an hour, but there you skate as much as you want. You can skate at 8, 9, 11 and so on until 7 pm. Brian, Tracy and I usually have two training sessions, one at 11 am, the second at 2 pm.

Third, when I arrived, it was obvious that the guys were waiting for me. They came to the rink, everyone said: “Zhenya, hello!” Although I didn’t even know who these people were. I didn’t have to get used in Canada, it was like I came home.

Is your level of English enough to understand all the nuances when when you work with a coach?

– Absolutely. I have no barrier.

Have this three months of negative competition experience influenced you in terms of growing up?

– I have got a lot of fantastic people around. I can’t name them all, but I had a lot of teachers, not necessarily with great experience. These are just people with whom I communicate. All these failures helped me to open my eyes, to see what can be learned from those who are close to me.

Previous post
Maxim Kovtun: I want to dedicate this victory to my mother
Next post
Oleg Vasiliev: Little girls shouldn’t be allowed to compete at Russian Nationals