Interviews made by Elena Vaitsekhovskaya are always a great pleasure to read. She has such a deep knowledge and understanding of the subject, she asks interesting questions and she can draw people out.

Here’s translation of her interview with Elena Buyanova. About Maxim Kovtun, Adelina Sotnikova and newcomers in her group – Adian Pitkeev and Maria Sotskova.

After more than just disappointing performance of Maxim Kovtun at Worlds the conversation started from this topic.

We talked once about sports psychology and you said that you’ve never need the services of such specialists. How difficult is it to find strengths to continue working with an athlete, who is experiencing so obvious psychological problems at competitions?

E.B.: I would say, that in this case, psychology is not the main reason. First of all, athlete must understand why he trains, for the sake of what goes through such physical load. When Maxim became the Russian champion for the first time, I tried to explain him that such state of being on the crest of the wave should be continuously fueled. That it won’t last forever. That sports life is very short. With age, he probably will start to feel it himself, but it may turn out that a limit of trust had already been reached. As well as limit of opportunities. At the beginning of last season, I actually suggested him a psychologist, I know that he met with the specialist, talked with him and even was going to attend the sessions. But in the end, these intentions have remained just intentions.

Couldn’t you as a coach control it?

E.B.: My coaching position has always been that the sportsman has to make decisions about his own destiny himself. I don’t think it necessary to force a person to work. My job – to help and teach, if athlete wants. By the way, I’m not ruling out that Maxim has decided to cope with his problems on his own, without help of psychologist. He’s a smart guy, a thinking one, and mature enough: after all, he’s 20  – it’s a solid age for an athlete.

I’m always impressed by Kovtun’s ability not to hide from the media even after a failure. But, frankly, I didn’t think, that he would go to the press after the free program in Boston.

E.B.: We’ve told about this a lot. Including in Boston, while we were sitting in the Kiss-and-cry. I like Max’s ability to take the blows. I think that athlete should be able to explain his result not only to a coach, but also to the fans. Another question – how deep he is going through it.

As a coach, do you understand the reason for such a crushing defeat?

E.B.: The thing is that a good result always involves a high degree of commitment. The athlete should breathe the sports, live it. If a person is banally disorganized, it becomes much more difficult to achieve result.

E.B.: Exactly. And because of this he can’t properly concentrate on what he’s doing. Max is a very talented man, he quickly learns everything new. But, like all talented people, he quickly gets bored of monotonous work. Interest must be constantly fueled, and it’s not easy.

I think in such situation coach has two options: either to accept everything that happens as a challenge and continue to work, or simply to expel the athlete and no longer spend his nerves. I’m sorry for honesty, but how close are you to the second option? Surely, after all you’ve thought about it too.

E.B.: Every coach has such moments. Just so much work and efforts was invested into Maxim, that I can’t destroy it all in one motion. Not to mention the fact that we’ve been working together for a long time, and I can see the qualities of athlete and human that I really like. We’ve already talked a lot, after we returned from Boston and I think next season will be decisive for both of us. In many ways. In the joint work as well.

And like many of his predecessors, who have left the sport into “nowhere”, will kick himself, knowing that time is lost?

E.B.: Exactly. I’m afraid of it the most. I don’t want such a fate for him. But the problem is really serious. You know, sometimes I asked to help our young coaches in work with children, and I see that some of these children in their seven to eight years -thay are athletes. I was the same: very early I started to understand what I want to achieve.

When I took Kovtun to my group in his 16, he hasn’t such understanding. You know, he came such a sloppy chop from the street, which can  jump well and think well – that’s all. Because even skating in Nikolai Morozov’s group and having the opportunity to go with him to the training camps in America, Max was receiving the most fun not from training, but from the fact he was skating in the same group with Florent Amodio and Javier Fernandez. He didn’t have a goal to win something. As well as understanding that first of all sport is a very hard work.

And now you can see what is going on. On the one hand we are somehow “ahead of” the situation by putting a task to perform five quads in two programs, and on the other – we have missed it, because yet Maxim can deal with these jumps only in training.

If Kovtun is be able to did the task next season and achieve consistency, will you take the next step ahead? And if so, what it will be?

E.B.: It’s not about further complication of the program. If Maxim do all that he can and must, it will be enough to remain competitive in the next two years. I mean till the Olympic Games in Korea. I’m not guessing for further. 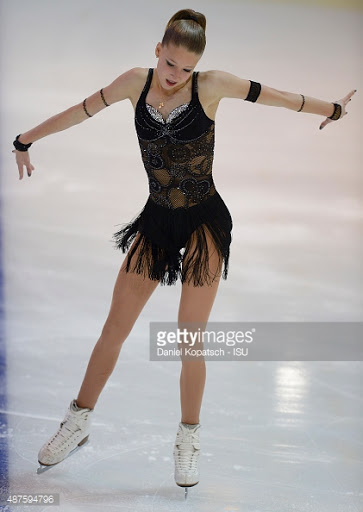 When we talked befire Olympic Games in Sochi you said that two skaters of Sotnikova and Kovtun’s level – it’s the limit, you are able to endure as a coach. Now you firstly took Adian Pitkeev to your group and then Maria Sotskova. Does it mean that Sotnikova will not return to amateur sports?

E.B.: We planned to return last season, but we failed. Adelina trains, we have already done the short program, which in my opinion is just awesome. She wants to skate, although, sometimes I think that deep down Adeline still has some doubt, that, in fact, doesn’t let her to plunge into work. As for Maria, she’s a good sparring partner for Sotnikova. Not to mention that I really like this skater. Otherwise, I wouldn’t have taken her.

But you didn’t take Anna Pogorilaya.

E.B.: I didn’t just because I knew how hard it would be for Adelina to go back and how much strength this process will require from both os us. In that situation, I just couldn’t afford to be distracted by someone else.

Did you take Pitkeev with the same goal – for sparring?

E.B.: Not only. He’s interesting for me as an athlete, it is interesting to work with him. Adian is light, fast, motor gifted, despite the outward shyness, inside he has quite unrealized “madness“. He can become a very interesting figure skater. Although, we haven’t really started to work.

Why do you think Sotnikova failed to get into the national team in the past season?

E.B.: I think Grand-prix Final, where all our girls including juniors skated very well. psychologically unsettled her a bit. Some inner doubts could have appeared, and at such level it’s enough for everything to go wrong. I would say that just a little bit we didn’t have enough heart. I don’t know why did it happen. Moreover, for me  it was quite a revelation that Adelina could get lost before the most important start.

Now everything is in her hands, not mine. I won’t hide, I am very interested to see how Adelina will handle it. Not only trainings is hard, but also a constant daily routine, the constant need to keep the weight strictly, refuse so many things, and much tougher than it was before the Olympics. If Sotnikova decides that she still needs, she will cope with anything, I’m sure.

Did you try as a coach to pressure on her, to force her?

E.B.: When an athlete is at this age, he must make such decisions himself. If you decide to keep going forward, as a coach, I’ll help and will go next to you without questions. Adelina also knows it. It’s just a really difficult situation. To returns in status of the Olympic champion has sense only in order to continue to fight to be the best. To work only in order to get into the team, it won’t be interesting either for her or for me.

How do you see the perfect season for Adelina?

E.B.: I’ll be able to say only after the summer camp, when the foundation will be laid.

I mean, do you plan to have any pre-season tournaments to refresh competitive skills?

E.B.: I don’t think that Sotnikova needs a large number of starts. It is good for little girls. With age, it’s becoming harder to recover between competitions. Even the competition requires a completely different commitment.

You’re in a difficult situation now: Kovtun with a vague prospect to learn how to deal with himself at competitions, Adian Pitkeev – with an equally vague prospect of recovery from a back injury, plus Sotskova, not really coming out of puberty and Sotnikova – without any guarantee of continuation of career. Don’t afraid to stay with nothing?

E.B.: That’s why I’m a coach and I should be able to cope with such situations. It’s clear that some things do not depend on me, but I see more advantages in working with all of this athletes, then disadvantages.

You are not working with children at all?

E.B.: Not any more, though, I help many coaches, when I asked about it. I think that with current trends in the development of figure skating for each age must be a different specialist.

When you were a young coach and your students left you and went to more experienced colleagues, you also thought it was right?

E.B.: Having repeatedly passed this “ladder”, I think so. I know that I can work with anybody, if the life will force. Just when you’ve been training seniors for many years, it’s not so interesting from the sporting point of view to train children. Children give great emotions, a keen sense that you are needed, incredible fun. Work with adults – it is quite another. Heavy professional work, where the coach should control everything down to the smallest details.

If you want results, then you must be a manager of your athletes, and a teacher, and you must to solve a bunch of everyday problems. And then why should I rely on the fact that someone will organize my own training process ? In sports, in general, no one owes nothing to nobody.

I think not all your colleagues will agree with this.

E.B.: Nevertheless I think so.

2 Responses to “Elena Buyanova: In sports no one owes nothing to nobody”