Carolina Kostner: It’s important for me now not to run ahead of the locomotive

My translation of recent interview with Carolina Kostner and Alexei Mishin by Elena Vaitsekhovskaya. Great interview, I simply couldn’t pass by it.

Talking with Alexei Mishin Elena Vaitsekhovskaya asked him whether Carolina, asking famous Russian coach for help, knew how long the path to success may be? The coach replied in the affirmative, saying:

– Carolina with full understanding concerned to the fact that it’s impossible to return all previous qualities at once, that the most difficult jumps we may mot be able to restore this season at all. I was taken even not by her striving to result, but by the fact that she believed in my words as in the Bible. Such an attitude to the coach and trainings is very rare, especially among Russian athletes.

That’s why you refused flatly to take money from her?

– When Carolina first came to my summer camp, I know, she paid the organizers for her visit, although in such camps we don’t take money from skaters of such level. As for our further relations with Costner, I immediately said that working with her it is not a business but a challenge for me. Desire to show that my system works not only on young athletes, but also on mature ones. Carolina answered that this is also a huge challenge for her, that she wants to return to the sport in a competitive state. So we found a common language.

At the last European Championship Mishin had to stop Costner rather than to coach. According to the well-known specialist, his athlete just reveled that she finally fell greedily upon real figure skating.

– I was pretty scared already by the very first workout. I gave Carolina a task to skate the layout of the program very reservedly, but she began to relish and at some moment started to skate in full force. I had to stop her and explain that we don’t need anything of this at practice. That all the training “beauty” should be fake, not consuming emotional forces and that is absolutely premature to open all the cards. I even said that when experienced actors in rehearsal are crying on the stage, this does not prevent them from thinking of gasoline prices at the same time. I do not know where Costner has been taken such a pleasure of figure skating for so many years, but it really fascinates me as a coach. I venture to suggest that with Carolina we are just at the beginning of the path. 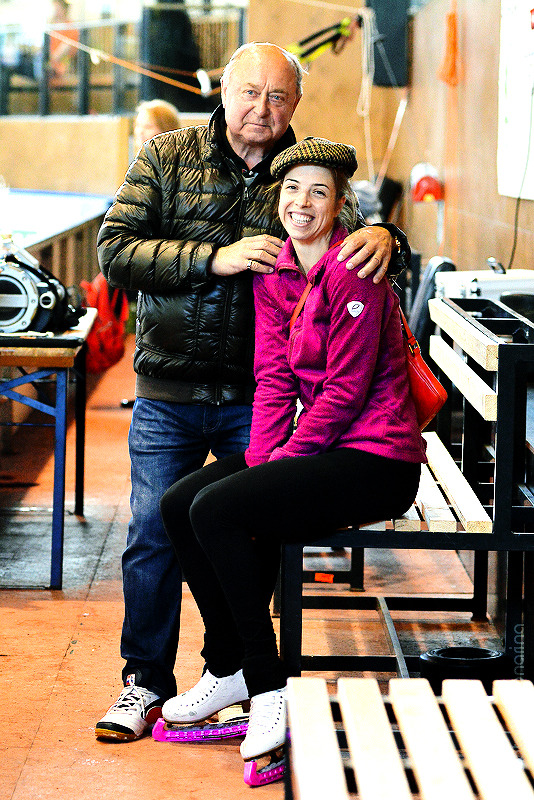 First question to Carolina was “Why Mishin?”

– To work with Mishin has been a dream of mine for a long time. Why? Probably because I love to learn. I first got to his training camp in 2006 after the Olympic Games in Turin and it was an amazing experience. A year later, I came to Mishin again. He’s amazing. His trainings are never boring. Even when you think you know everything in figure skating, Alexei Nikolaevich is still able to find something that makes you feel again a silly little chap on the ice.

When I decided that I want to come back, then I asked myself the question: who of the coaches can give me the maximum amount of new knowledge? So by and large I even didn’t have to choose. The only question was whether I would be able to make Mishin interested sufficiently, that he would want to work with me. To my surprise, he said: “Yes.”

You had so low opinion of your athletic appeal, when started to work after disqualification?

– I was not in the best shape, so to speak. It was necessary to return a lot of qualities and at the same time learn some new things for me.

I know that before you’ve started a permanent work with the Russian coach you intended to look for a coach in Canada?

– My permanent choreographer Lori Nichol lives and works in this country. That’s why I thought about possibility to train in Toronto for a while, if things wouldn’t turn out in Europe. At the same time I didn’t want to apply to coaches with whom I have worked. Sometimes an athlete really needs to get a look from the side and be told something in other words, even if the meaning of these words is the same with what his former coaches were saying.

In fact, sometimes it is difficult to explain how some decisions were made. In my case, it was not a precise preliminary plan. I came to Mishin’s training camp in Tartu keeping in mind only that I need to try to derive the maximum benefit. I liked the result. I wanted more.

In a short time you managed not only to restore almost all jumps, but even change their technique. Was it difficult?

– Very. But in fact the most difficult was to work out again a correct sense of apprenticeship, to do on the ice not what you have learned in more than two decades, but what the coach says. Diligently, thoroughly, taking all criticism, getting up after the falls and continuing to work silently. A couple of months it was so. Steps, simple jumps, mostly doubles. And a great number of various exercises. And nothing turned out. Every evening I returned home from trainings saying to myself out loud that everything will work out, though at the same time I was thinking differently. But at some point everything really started to fall into place. It was such a cool feeling!

At competitions in Ostrava you twice, in the short and long programs, did a combination of two triple toe loops. Didn’t you have a temptation to do it with a flip?

– For me it is very important to move forward, not jumping over the stairs. Do not run ahead of the locomotive, as you say. The primary task is to restore consistency and then the confidence will also return for sure. That’s when it will be possible to return more difficult jumps to the program.

You talk more like a coach, athletes always torn to do the impossible as soon as possible.

And yet, are you ready to complicate your program for the World Championships, which will be held in March in Helsinki, or it is a task for the next season?

– I will say this: the World Championships is certainly not the highest and only goal for us. Even though I’ve always liked to train a lot, I can’t skate without stopping, as I did being a 16 year old. That is why we work very thoughtfully, without losing sight of any little thing. Of course, I want to restore all the jumps as quickly as possible. When we discussed with Mishin performance in Ostrava I agreed that first we should strive to skate both programs clean, rather than to show maximum complexity at any cost. Not the fact that with such approach I would have been able to avoid mistakes.

At the same time, two months before the World Championships it’s quite a long time to take another step forward. And of course I will make every effort to do it.

According to your inner feelings how big is your technical potential? Do you feel capable to raise the base value of your free program to the level on which the strongest skaters of the world compete?

– I see nothing unreal in this task. I would even say that program, which we have shown in Ostrava not fully reflects my current abilities.

– But I’m a realist. I am pleased, that Mishin and I managed to reach a new quality level of trainings. I almost don’t make big mistakes there, which had not happened to me before. It inspires greatly, motivates and helps to understand how and where to go further.

What turned out the most unusual and perhaps odd for you in Mishin’s training system?

– Variety, sometimes reaching the point of absurdity. A couple of times I got the task and my first thought was: “No, just not this, it is impossible”. And then you go and do. And you realize that there is absolutely nothing wrong if some exercise does not work out from the first time. But it’s not boring. The problem of many athletes that over the years of trainings they got used to work in the same way, spend warm-ups in the same way, prepare for competitions and don’t notice that such routine actions lead to a certain stiffness, make your mind less mobile.

For me it was strange that it’s possible to change the program by moving the whole parts in two days before competitions and it does not lead to disaster. It was also an interesting experience. Generally during the work with Mishin, I realized that you should never be afraid to try something. Perhaps on some things you just will need more time. But any skills are never redundant for any athlete. Probably not just for an athlete.

Your costumes are still the standard of style. As far as I know, you’re no longer working with Roberto Cavalli?

– I’ve worked with him for many years, but our cooperation stopped right after the Olympic Games in Vancouver. Now young Italian designer Gianni Sapone works on my costumes, both of us like to experiment with fabrics, decorative elements. I generally like to work with Italian designers. When we worked with Cavalli, many models he designed specifically for me, considering all my wishes, we both liked this work, although in those years I’ve been spending not much time in Italy because I constantly was training in Oberstdorf. But we were always in touch, Roberto sent sketches, shared ideas. I think that through the costumes my Italian soul, my ideas of beauty of movements are shown very well. That’s why it’s so important for me.

Perhaps I’ll ask a hard question for you, but how it was to make a living in the police service, as you had to in the period of disqualification, after the years of earning by skating?

– You know, I’ve never been a spendthrift, I’ve never been tend to spend money on something that does not connected with figure skating. Anyway everything earned I was investing in training, costumes, food, rehabilitation, payment of various specialists. That period of which you talk, it was not easy, primarily because I temporarily lost my beloved profession, but it was necessary to overcome without making a tragedy out of what happened. At the same time it was quite enough money for living.

Now in this life do you have time for anything else than skating?

– At the moment no, but I consciously chose such a path for the next two years. If we talk about the future, I would like to do something to be able to help people. Perhaps it will be a charitable foundation. In recent years, Italy has not the best of times, there were many catastrophes, and for me, like for any Italian, it is very painful to see the suffering of my country. Of course I think a lot about it. If it’s possible, I always take part in charity events, held masterclasses. If I can make a life better even for a small number of people, if because of me at least one child will smile, then not in vain I chose this path.

One response to “Carolina Kostner: It’s important for me now not to run ahead of the locomotive”