I can’t say that I’m agree with the first results in ice dance (especially with first and second place). But I will try to sum up the fashion results. No matter which place you have after SD, in my ranking only style and quality of costumes are important) So, here are my top-5 best costumes from the short dance at World Championships 2016:

I’m not a fan of such bright neon shades, but I liked Alexandra’s dress. The dress is memorable, its reminds me of ballroom competition and it’s definitely not a bad comparison for the short dance costume. Bright, sparkling, playful – good choice for a young girl, who wants to be remembered. A dress that probably won’t look good on everyone. But Alexandra has almost model appearance, so she can afford to wear such dress without fear to look fat, funny or too childish. I also like that Ivan doesn’t wear a tailcoat or something too formal. I like his a bit of “bad boy” look.

I like the costume change for Evan. In this plush jacket he doesn’t look like a vampire) As for Madison, I really thought she would change the dress before the Worlds. No. The dress is lovely and totally deserve to be in top-5. I’ve already discuss this dress here. But I have to change my mind, because I’ve expected something more for the home Worlds) This dress can’t compete with such gorgeous gowns like Anna’s or Kaitlyn’s. In competition with them she looks a bit simple. I like simplicity in figure skating costumes, but this dress is neither laconically chic nor marvelous with all its finishing. It’s somewhere in the middle. But I like the drapery and the green layer – quite unpredictable)

And here’s the simplicity in it’s all beauty! Modern, laconic, chic costumes. I absolutely love Guillaume’s costume! He looks just like from the fashion magazine cover! And those applique on the collars! Hot, stylish….have I already said hot?) In this top it’s the only pair of costumes where I prefer the male costume more. As for Gabriella’s dress it’s also laconically chic and I like her in red. But I prefere the previous dress more. It had a more interesting design and finishing. But I do understand the reasons for change. They obviously wanted to add some romanticism, some lightness into the dance….to hide some moments…especially in the pattern…and looking at the scores the change was really successful.

Anna and Luca always look good! Some of their costumes were better than others, but I don’t remember any costume failure from them! Ever! Anna’s dress look stunning. It reminds me of D&G white laces dresses:: this and this. black ribbon just made the whole look. So elegant! Exquisite beauty! Luca like always look great (he’s also always very well dresses, and all his costumes are fitted greatly), but I prefer his previous costume more) 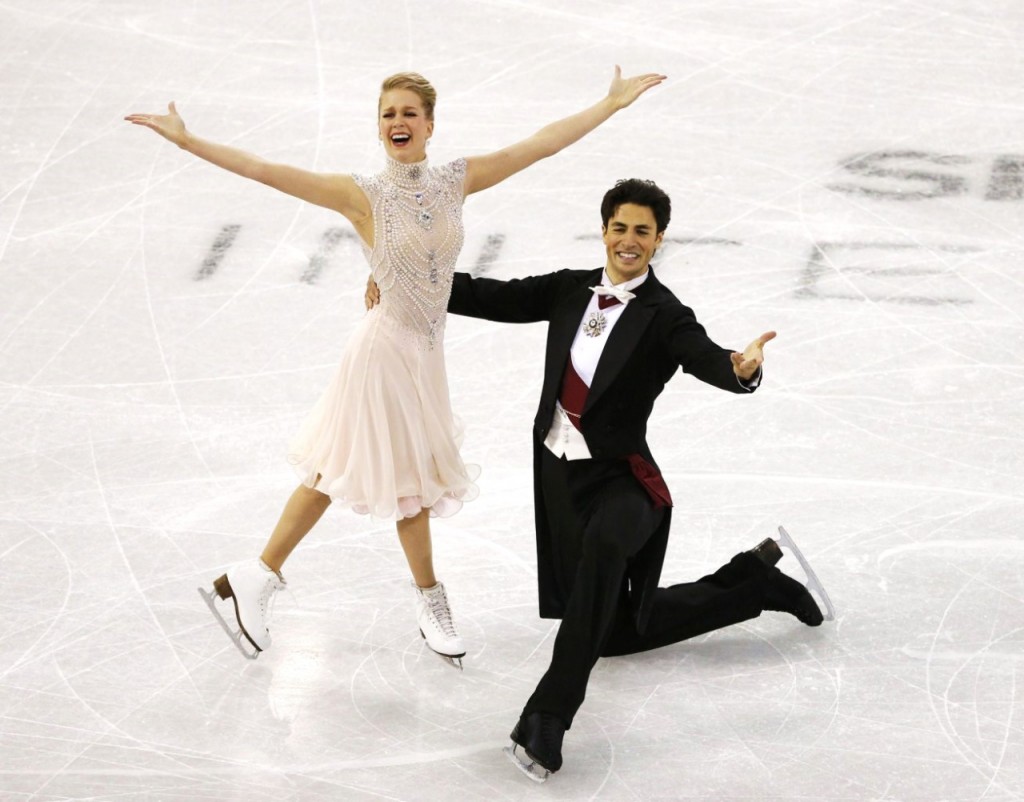 This costumes have been my fashion favorites all the season. And nothing has changed at the Worlds. No one can compete with them in this royal look. And royalness is a winning choice dor waltz….always) They look like the king and queen opening the ball with their first waltz. Actually I discuss this costumes so many times (for example here) and I don’t know what to add. Everything just perfect! Marvelous costumes!