Alexei Urmanov: Julia is a professional with a capital letter

Translation of an interview with Alexei Urmanov. About Sochi, young skaters and coaching and of course Julia Lipnitskaya.

A lot of time have passed since you moved to Sochi. How do you think it was a right decision?

A.U.: Absolutely. I’m completely satisfied with everything that concerns training process. I have no claims to working conditions or quality and quantity of ice.

In Sochi are less temptations for a young skater in comparison with the two capitals?

A.U.: Fortunately, I’ve no complaints to my students about way of life and routine. They are all very good guys, sport orientated. Big thank you to them for that. And if we talk about any temptations of big cities – believe me, when a person wants to do something that might be detrimental to sport training, he’ll find a way to do it even in the forest.

Has the medical supervision in your group increased due to mildronate situation?

A.U.: I hope that as a coach I’m an example for the guys. We, of course, talk about these issues, and they know for sure that, when I was in their place, I have never resorted to any illegal drugs and stimulants. There are no people in our group who would take something forbidden. So, it wasn’t necessary to raise the level of control, and in this case  everything is in the default order.

How much time is needed to understand the perspectives of the young skater?

A.U.: It all depends on the age. When they only start, then, of course, you can’t see it in their 4-5 years. With elder children you will see it quicker.

For example, in your group skates a boy less taught, less talented than other, but persistent and with fire in his eyes. Will you keep him, hoping that due to his hard work he will catch up and overtake the others?

A.U.: First of all I would say that generally less able children in a certain age decide – either to quit or to change a discipline. Personally, I’m not a tough person in terms of it. But, nevertheless, at some point skater, coaches, parents have to get an understanding whether there are a positive prospects for continuing a figure skating career in singles.

Can in Russia in the nearest future appear such gifted in terms of jumps skater as Boyang Jin?

A.U.: I think yes. We already have some guys who at trainings almost learned a quadruple lutz. But while I don’t know any Russian skaters who have three different quads.

The fact that more and more girls start to do “tano” – jumps with raised hand, may adversely affect the composition of their programs? Would there be too much of such jumps at the expense of beauty?

A.U.: I don’t think so. It’s a way of technical complication. And in the women’s figure skating there are two possible ways of complication: either by performing jumps with a hand or by adding a quad or triple axel. And to put it mildly, today very, very few skaters can brag of stable performance of these multi-rotational elements. So we have to use another method. 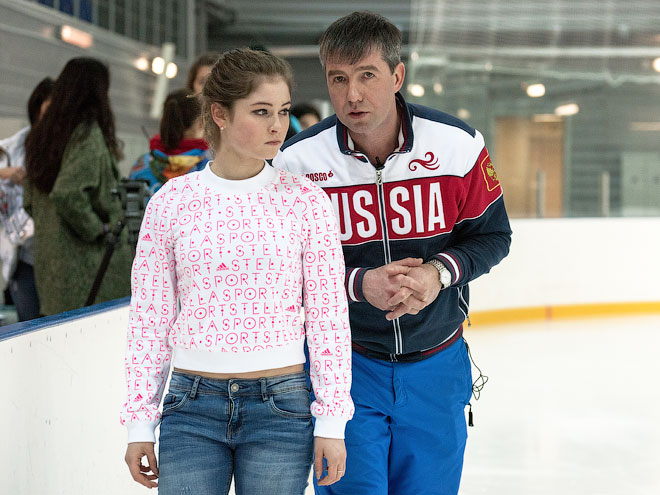 With Julia Lipnitskaya you have been working for six months. Can you make the first conclusions? Are the rumors of her difficult character true?

A.U.: You know, I talked a lot with my colleagues on this topic. And we agree on one thing – you will hardly find an outstanding, reached the top athletes with an easy character. There are no good boys and girls on such level. Julia has normal sports character, completely appropriate for achieving success. We’ve found a common language, we have an absolute contact in work. Yes, we still have a lot to do, but I see that Julia is moving in the right direction.

Lipnitskaya is one of those skaters who unquestioningly does what coach said, or she should always be explained why it is useful?

A.U.: Good question. Julia tries to do everything that she is given. But as a coach and teacher, also a new one for her, I always explain why we are doing one or the other thing. The athlete should always understand what he’s doing. In our team we really don’t like to force the skaters to do a dull work, which they don’t understand.

Last season, you and Julia moved the jump combinations into the second half of the program. What was the purpose of this decision?

A.U.: Probably, it isn’t necessary to pay a close attention to this. Our season is over, the next one is ahead, where will be new programs and a new lay out of elements. As for the previous part, firstly, there was no super complicated combinations, and secondly, we had a very little time to prepare.

After the problems started after Sochi, there were fears that Lipnitskaya will have to change the jumping technique completely.

A.U.: We are working a lot on jumping technique. But we are not changing anything completely. The base will remain unchanged.

I can’t but ask this question. If suddenly something goes wrong, will Julia be mentally ready to skate for herself, and her huge army of fans, delighting them with all new roles, programs, artistry, but at the same time not claiming for the prizes? For example, as Misha Ge does.

A.U.: Then I will answer very simply. Today the competition in the women’s figure skating in Russia is more than just serious. But Julia is a professional with a capital letter, who really wants to skate. It’s her favorite thing, she’s a very persistent person. And I’m 100% sure that she will make every effort to be absolutely competitive and to win.

By the way, about competition. Is it necessary to raise the age in women’s skating for participation in senior tournaments?

A.U.: You raised a right question. However, it is not exactly in my jurisdiction. But personally, I think that 15 years, from which you can participate in competitions among seniors, perhaps it’s too early. We must understand that it’s always more difficult for a 25-year-old girl to compete with the 15-year-old.

In the end of our conversation, I’ll ask the obvious question: what goals you and Julia have for the next season?

A.U.: Goals are really clear: to return to the national team and to get the right to participate in major tournaments such as the European and World Championships. And the main among them – in two years be selected for the Olympics in Korea.