Alexei Mishin commented on the performance of his skaters at Nebelhorn Trophy 2016, work with Carolina Kostner and Patrick Chan’s new coach.

A.M.: I’d like to start with Artur Dmitriev, who seemingly performed unsuccessfully. In fact, I regard his performance as very good. Now two clean triple axels and quad in the program for Russian skater it’s a certain capital. Artur showed such skating. And as our judges told us, on the judging meeting it was formulated an opinion that Dmitriev was underestimated. He skated well.

If we talk about Sasha Petrov, he did clean short and free programs. In Oberstdorf gathered quite serious company of skaters whose names are on the public eye. Competitors from USA and Canada tried to do a quadruple jump, but Petrov coped with the task and beat them.

But the greatest joy was Liza Tuktamysheva. She finally got the freedom of movements and coordination, which she had in childhood. She couldn’t take the first place due to inadvertent fall on the double axel in the end of the program and lost points, which in the end lacked for victory. To summarize – taking into consideration how things were going at the beginning of the season, I’m satisfied with all my students.

Alexander Petrov tried to do a quadruple jump at the beginning of free program, which he hasn’t done successfully at competitions  …

A.M.: This is true. But he doubled it. Generally, Sasha is already very close to a quad. You know, there are skaters in our team who can do something, but don’t show it. We saw this last season, and at the beginning of this. Sasha belongs to athletes, who show at competitions, what they can. As for the quadruple jump, Olympic champion Alexei Urmanov, for example, has mastered it much later than, for example Zhenya Plushenko, or Alexei Krasnozhon or Makar Ignatov, who skated with us. They learned a quadruple jump in the childhood. But it means nothing, each has his own way into high society. And I have no doubt that Sasha Petrov will learn a quadruple to such level of confidence to put it into the program. And if he have a quadruple toe loop, then there will be other quads. My position is: I work with those, whom I have, and do a good athletes of them.

This week at the stage of Junior Grand Prix Alexei Krasnozhon, who now represents the United States, did a quad loop. He had not a good landing but it was counted. What can you say about your former student?

A.M.: This is the same level of quad loop that Krasnozhon showed when skated with us. He also has been doing triple axels for few years, when he was training in St. Petersburg. So noble task of American coaches was to polish it.

A dangerous rival is growing?

A.M.: For not to forget myself, I will say this: horses that come out of our stables are always dangerous. 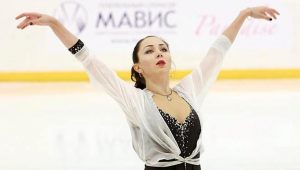 Tuktamysheva has an obvious progress compared to test skates in Sochi two weeks ago.

A.M.: Of course. I was very pleased. Among the athletes with whom she competed in Oberstdorf were skaters with wellknown names – for example, Canadian Gabrielle Daleman. Japanese girl, who won, was relatively unknown, but performed jumps at full speed, skating on the level of highest international class. And, despite this, Lisa was close to victory, but unfortunate fall prevented it. She also beat Japanese girl in components scores.

The structure of Elizaveta’s short program, apparently, doesn’t include the execution of triple axel – a corona weapon of your student?

A.M.: We are working on it. As soon as the triple axel returns to Lisa, the order of the elements will be reviewed.

Do you have a certain terms, when it is necessary to return a triple axel?

A.M.: There was timing when we lived by five-year periods. Then there were terms – five years in four years, for example. It’s very difficult to make plans for five years in figure skating.

On Friday it became known that the three-time world champion Patrick Chan will train with Marina Zueva, who works mainly with ice dancers. Did this news surprised you?

A.M.: I have a deep respect for Zueva. I think she will give even more artistic merit to Chan’s divine manner of skating. In general, last season I have watched how Chan suffers with triple Axel, came to him and said, ‘Patrick, take three lessons with me, and I will teach you that jump.’ Quadruple he is doing well, and I could fix his triple axel.

A.M.: Not yet. But now I coach famous Italian figure skater Carolina Kostner, work with well-known figure skater Misha Ge, soon will arrive a Chinese champion (Zijun Li?). I’m in demand as a coach, and therefore don’t leave into the world of veterans of coaching field.

How is your progress in work with Carolina Kostner?

A.M.: When we came to Stefan Lambiel to do programs, Costner trained on the same ice and was clutching at her hair because jumps didn’t turn out. And she asked me for help. When she appeared on my horizon, she barely did a double axel, triple toe, and with a great difficulty a triple Salchow. And now she’s doing all triple jumps and very pleased with our work. Carolina’s mother came and said: ‘Mille Grazie’, which means ‘Thank you a thousand times.’