Alexander Zhulin summed up the results of Russian Nationals 2017.

Mikhail Kolyada won the Russian National Championships. What can we expect from him at international competitions? Don’t you think that his free program lacks some more quad jumps?

– For sure the guy improves. He already had two rotated quad lutz. However, he still sometimes falls on them, but do his so high lutz at practices and warm-ups. If he masters these jumps and add to them two quad toe loops and salchow, he will claim for the highest place at any level. Kolyada has excellent technique of skating. He slightly inferior to Yuzuru Hanyu and Patrick Chan, but he’s quite competitive, especially if we talk about European level.

Alexander Samarin our another recent junior also pleasantly surprised. Can we call him the main breakthrough of the competitions?

–  I know him personally, because Samarin’s coach Svetlana Sokolovskaya is my close friend, and I can say that Sasha is a fantastically hard-working guy. He showed incredible result. The fact that in his 18 years old he performed so well at the senior level on the background of fatigue after Grand Prix ​​is worth a lot. Aiming at the Olympic Games in PyeongChang we need to take into the team such guys, such fighters as Evgeni Plushenko and Alexei Yagudin were in their times. I don’t want to jinx Kolyada and Samarin, they pleased a lot. Although, of course, these words more relate to Mikhail and Alexander still has to work on the second mark. He did great as for the first time, but he need to improve in speed and skating skills. In this our Japanese and Canadian friends are still ahead.

On the other hand, Maxim Kovtun failed the short program, but became third overall …

– I’m not surprised, he always skates well only one program of the two and can’t gather them together. As a result, once he’s 5th, another time 25th. At a high level such spread is unallowable. In my opinion, Kovtun’s flounces from coach to coach did not go in his favor.

What happened to Sergei Voronov at the end of the season? He started well, got on the podium at the Grand Prix in Beijing …

– Sergey is an experienced athlete, but age takes. Small mistakes that Voronov did in the free program immediately threw him on the seventh place. Perhaps he can claim a good result only with error-free skating. I think in federation only exhaled in relief when Sergei made his mistakes, because it wouldn’t be a good option to make a bet on skater in his age at the European Championships.

Let’s move on to women. Is Evgenia Medvedeva the phenomenon of figure skating?

– Of course. She has everything for a good result. If she enter the new season in the same shape, both physical and psychological, she will be our main hope for an Olympic gold medal in Pyeongchang.

I would also like to say a few words about Alina Zagitova who took the second place. I’m in awe of her jumping technique. They are phenomenal. The girl is simply delightful, you can see a fantastic potential. I think she’ll suck some blood from her rivals at the senior level. It is a pity that she’s not age eligible for international competitions. Her group have dome a great job.

It seemed that the whole last warm-up was impressive …

– Of course, Anna Pogorilaya began to work completely like a grown-up. Maria Sotskova is also strong. I wouldn’t want to be on judge’s place. But I have no questions about first two places because here the technical scores played a part.

What do you think about Medvedeva’s extra jump?

– I don’t understand this rule. A man can do triple jumps so let him do! It’s just a pleasure to watch such programs. If the skaters jump three triple jumps in combination, give them a possibility to do one more jump to beautify skating. It’s like someone now start to do a jump in five turns and it won’t be counted. But gray mouses is sitting and monitor edges understanding nothing in development that is happening. They found some inner edge on Pogorilaya’s jump when she has been jumping from an outside the whole life….

In Chelyabinsk it also didn’t turn out for Elizaveta Tuktamysheva. Has she reached her maximum?

– Hardly. All the problems are in her head. Remember the season 2014/15 when she won European and then World Championships. It is impossible to forget how to do elements and jumps. For the second season in a row didn’t work out, but you can see a little overweight, shortcomings in the training process. Triple axel is gone, it’s hard for Liza without it. I wish her to turn on for the  Olympic season, to work harder, to regain axel and then she will return on her previous level.

How do you asses the results in pair skating. Stolbova and Klimov have won after her return…

– I think they are the best in the world in terms of choreography. No one skates their programs with such plastique and speed.  They are a bit lacking in technique compared to Evgenia Tarasova and Vladimir Morozov, but they compensate in the second mark. They’ll improve till Olympic Games, and I have no questions about their victory in Chelyabinsk. Tarasova and Morozov are very technical, interesting duo who has made enormous progress. But they are still inferior Stolbova and Klimov.

Maybe they didn’t cope with the pressure after Ksenia and Fedor’s performance?

–  I assume this version, but still would like to mention a lack of experience. Stolbova and Klimov, after all, the Olympic champions, and Tarasova and Morozov haven’t reached such top yet.

Yuko Kavaguti and Alexander Smirnov stopped achieving results. What is the future of this pair?

– Unfortunately, everything are going on the downlink for them. They need a fresh blood, but where to take it? Either it is necessary to “extort” from Alexander, or from Yuko, or Tamara Moskvina. The motivation is lost, and, in my opinion, Yuko’s injury affected a lot. After such an athlete protects his body, no matter whether he wants it or not. They need to find motivation, think of something, otherwise it’s time to try yourself in some other fields. 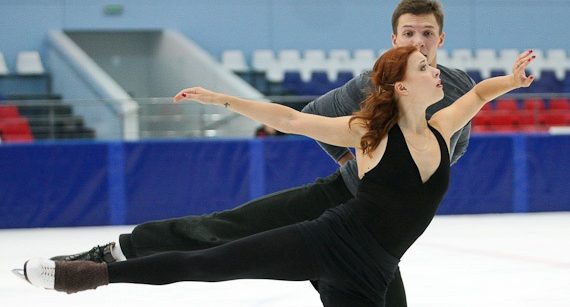 Ekaterina Bobrova and Dmitri Soloviev showed the same level as Tessa Virtue and Scott Moir at the Grand-prix Final. Can we say that among them will a fight on equals at the World Championships?

– Previously Virtue / Moir and Davis / White showed cosmic level. For the gold at all competitions fighted only they, everyone eles fighted for the bronze. Now it’s not like this and I’m very happy.  Bobrova / Soloviev themselves note that they reached a new level. They have increased in speed, artistic and cleanness of skating. But you can not rest on laurels, especially me as a coach. The main thing to continue reducing the distance between us and our competitors.

Do not forget that guys have missed a year due to Soloviev’s injury. It threw us back, judges started to perceive us  differently. We had to start from 7.50 marks, which does not correspond to our level, but we managed to improve and this affected the result, we started to get marks above nines.

What can you say about competition at the European Championships?

– Gabriella Papadakis / Guillaume Cizeron are a strong pair, but they are highly overestimated. Now they don’t show such a high level as two or three years ago. But no one looks into their skating, judges automatically put high scores and if you look closely, you will see that they have such lifts that any junior can do.

Maybe it’s because of their past achievements?

– I would not say that. They do everything calmly and judges give high marks for not the most difficult elements. A pair skates nicely, but I don’t see difficulty in their program. The lift with the spread eagle is simple. Guillaume just puts her on the hip. It shouldn’t be like this. If you do a level four lift people need to understand that this’s a difficult element. For me it is a mystery why everything is rated so high.

You said that you have a lot of work with Bobrova and Soloviev. what was wrong in Chelyabinsk?

– Any athlete, even the Olympic champion has a lot of flaws. It’s necessary to improve in everything. Ekaterina and Dmitri did their job on a very good level, given the fact that the guys recently returned from the Grand Prix Final, and then Solovyev got ill. They made the maximum they could.

Previous post
Maxim Kovtun: every day I come to practice with a smile
Next post
I believe in Patrick Chan

4 Responses to “Alexander Zhulin: Medvedeva is a phenomenon of figure skating”