Alena can you please summarise the results of this sporting year? How it turned out for you?

Alena: Crumpled and incomprehensible. On the one hand, I failed the competition to which I have been prepared well. On the other hand, competitions, for which I wasn’t able to prepare for hundred percent due to injury, turned out well. I’m satisfied with the result in Saransk (Russian Cup Final). It’s a good ending of the season.

Do you have already some thoughts for the next season – programs, costumes? Or it’s too early to talk about this?

Alena: I don’t have any ideas about new programs yet. It’s necessary to change both the short and the free program. Now I’m in the search. I don’t know yet what I want.

In recent years, the competition in the women’s figure skating is incredibly aggravated: Julia Lipnitskaya, Adelina Sotnikova, Evgenia Medvedeva, Elena Radionova. How to compete with them?

Alena: The competition is increasing every year. More and more junior skaters worthy to represent our country at the European and World Championships. To fight with them, you need to learn the new elements, first of all jump combinations. I think that I don’t lose in PCS. The main thing is to improve technical part of the programs.

Due to what such unprecedented competition in the women’s team has appeared? Ten years ago it was nothing like this. And now to win Russian Nationals it’s like to win the World Championships …

How has your vision of figure skating changed in recent years? Remember yours 15-16?

Alena: Oh sure. In 15 years, I have just started to land triple jumps, and only every other time.  Learning the 3-3 was out of the question. Figure skating in recent years is moving forward with great speed. And in all disciplines. It is difficult to learn something new, if for a half of your sporting life on the international level you have been jumping only a typical set of triples.

How do you think, when Julia Lipnitskaya will get out of this  difficult situation in which she got right after the Olympics?

Alena: Julia is already progressing. She showed it at the Russian Championships, after she moved to Alexei Urmanov. I think if she continues to work in this sort of thing, she will overcome this difficult situation.

In recent years, there were times of a series of misfortunes, haven’t you thought, “Maybe, it’s time to…..”?

Alena: Yes, this summer, when the preparation for the season was not going the best way. In early June, I did a great job at the training camp. I was prepared very good. And then, on the ice training, the jumps were in total mess: nothing worked out. I wanted to quit. But figure skating still is the best that I can do, it’s my life. And, of course, all bad thoughts disappeared.

Not so long ago you changed coach. What are your impressions from working with Evgeni Rukavitsin?

Alena: I like to train with him. There is competition in the group. I learned a lot about technique. I consider him as a very good coach, able to brought up an Olympic Champions. 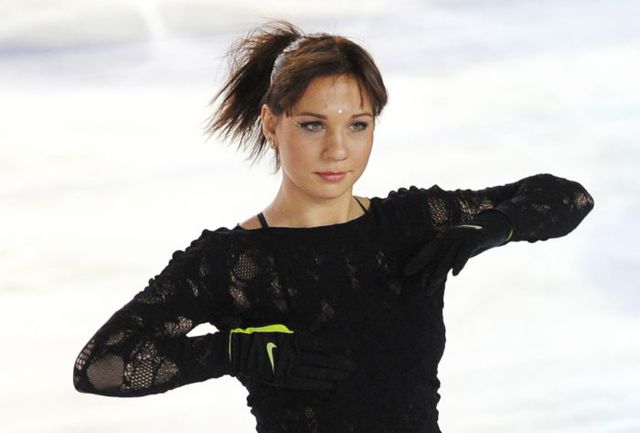 What new he has brought into your skating?

Alena: The technique of the jumps, he taught me how to jump a triple lutz from an outside edge.

What advice would you give to today’s youth – Medvedeva, Radionova, because they have to go through a puberty period, from which not everyone come without losses?

Alena: Do not give up in any difficult situation. On the example of Lena Radionova I can say that she‘s a real fighter. To grew so much over the summer and didn’t lose jumps, to fight till the end on every competition. Only a person, who truly devoted to figure skating can do this.

Where do you get the strength not give up and to move forward?

Alena: I do not have to find strengthe. My emotions and desire to skate it’s enough for me. I live in what I do. Figure skating is my life. I want to achieve a lot, and to show myself in the following seasons.

This week the sports community was struck by a series of scandals about the use of prohibited  meldonium. Has it been prescribed you?

Alena:I was taking Mildronate but long time ago. Honestly, I did not understand what are it benefits. Personally, I did not feel anything. I think everything comes from the head. If to convince yourself that it helps, you can probably feel the drug’s effectiveness.

What goal did you set for the near future?

Alena:  Return to the “big arena”. For this It’s necessary for to spend productively the summer camp and be in a good shape already at the test skates in August.