Trophee Eric Bompard have already brought some unpredictable intermediate results. Before I made a list of 10 main intriques of TEB 2015 and here is my review for the first day of this event.

Gracie Gold first after the short program. She skated with lots of fire and technicaly it was a also a strong performance. She was a bit careful with her 3 flip, probably keeping in mind that she doubled it at Skate America and it costed her gold. The marks are impressive but please work a bit on her arms! It’s too many arm movemnts, some of which is not actually necessary. Also love her dress a lot.

Julia Lipnnitskaia seems to be getting back. She’s starting to get use to her new body and proportions. With a clean skate and right mood her short program looks really nice and interesting. It’s a program for the young lady and not a girl, I like that Zueva found a bit of playfulness in Julia. She also seems to feel more comfortable in this new dress, but previous one was better for this program stylistically.

Elizaveta Tuktamysheva has a disaster short program. It’s a price of 3 axel. If you’re not ready it ruins your program and Liza is definitely not in her best shape. She has a new dress. That’s good. But the dress is also a disaster and should be burned immediately.

Nicolai Sorensen eventually did his twizzles. This time their short dance looked interesting and both parts look united what is a rare this season. I also has a bad feeling that Laurence Fournier Beaudry and Nicolai Sorensen was a bit underestimated and their scores could be higher.

Madison Hubbell – Zachary Donohue have the best waltz among all unclassical waltzes of the season. It gives you goosebumps. Everything is so smooth, one move just goes into another. Well deserved 1st place after the short dance. The competition in US team this season will be really interesting to watch and who knows how it will ended.

Patrick Chan broke my heart again. Perfect 4-3 on the warm-up and only 2-2 in routine. And I hoped so much to see this program skated clean!

Shoma Uno was really good! The program looks interesting and modern. I like that his programs are different. Modern short and classical free. It shows that he’s a versatile slater and can try different styles in his skating. The landings from his jumps aren’t perfect and need some work. But we definitely can expect a lot from this young Japanese men.

Maxim Kovtun surprised me with his pretty solid skate. I didn’t expect him to land all his jumps and his shape wasn’t good enough. But somehow he managed to to it. Seems Kovtun is still a Russin hope in men’s skating)

Vanessa James – Morgan Cipres surprisingly second after the short program. If not a doubled side by side jump from Morgan it could be one of their best performances for the last two seasons. Like their program, it suits them a lot. Vanessa is just gorgeous beauty. Their triple twist also looks way better. The thing that worries me is where all Swarovski crystals which Morgan likes so much?) 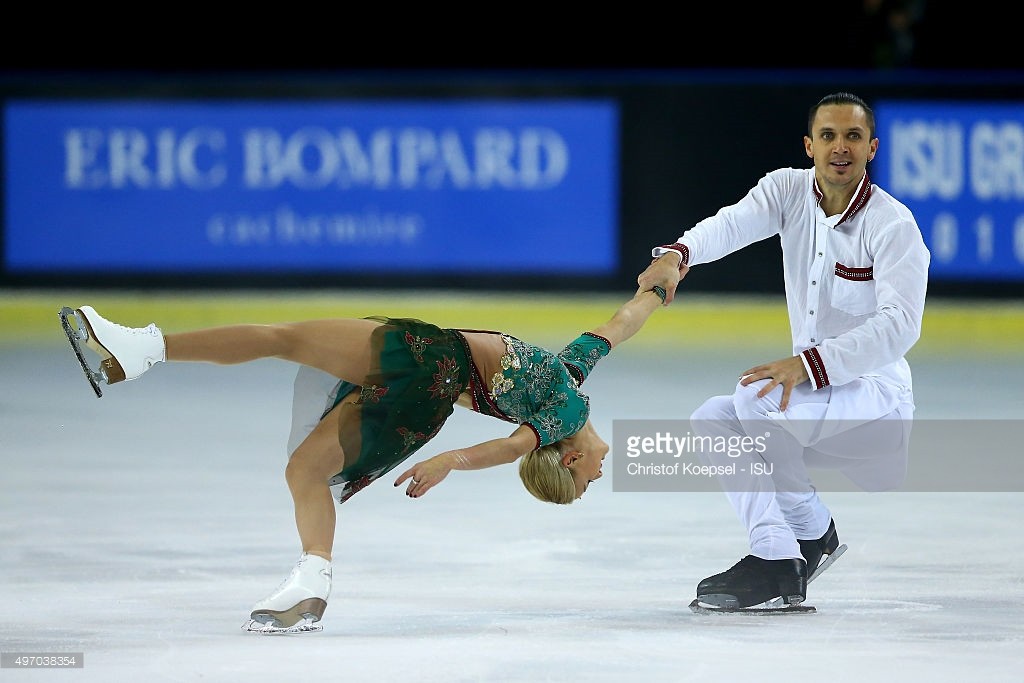 Tatiana Volosozhar and Maxim Trankov showed how serious they are about their come back. Huge scores for the short program and as for me a slightly generous. The program is nice and bright, the elements were good (except the throw where Tatiana put the second foot) but they also seem a bit slow. So, how many they will get with a better skate? And I’m still hoping for a better costume for Maxim.

Writing this I heven’t been known that the event was canceled and that the short programs will be the only thing that we’ll able to see from TEB 15. I hope all skaters and thier coaches will be safe and sound and ISU somehow will invent the procedure of getting into the GP Final. But of course it’s not so important in this situation. My deepest condolences to France.